Walther firearms have always had an interesting time here in the States. Through the years, they’ve been available through various importers, with memorable stints from Interarms and Smith & Wesson. In fact, “Interarms Walther PPk” is a recommended google search for the Interarms brand. For many years, Interarms assembled PPk pistols in the US specifically because the PPk didn’t meet the import restrictions of GCA ’68. 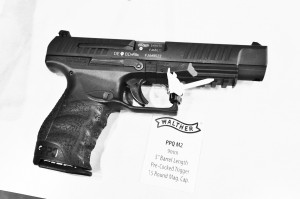 After the end of Interarms, new Walther firearms were available through Smith & Wesson. To many of our readers, this is ancient history, but during the late 90s and up until fairly recently, Smith & Wesson and Walther shared a “strategic partnership” where S&W acted as the importer of Walther’s guns and also took over the domestic “manufacture” of the PPk. In 1999, 6 years before the introduction of the M&P, Smith & Wesson and Walther collaborated on the SW99, which mated a Walther produced P99 frame to a S&W produced barrel and slide. At the time, the only polymer pistol in S&W’s lineup was the S&W Sigma, which was not highly regarded by the shooting community. The SW99 was an interesting gun, but never really caught on. It was in many ways doomed by Walther P99, which was better to look and similar to shoot, and of course the market domination of Glock. The eventual introduction of the M&P killed the SW99 for good.

During that time however, S&W was importing the Walther P99, which gained a bit of a pop culture boost when James Bond, played by Pierce Brosnan used it as his sidearm in Tomorrow Never Dies, The World is not Enough, and his last outing Die Another Day. In fact, it’s in Tomorrow Never Dies where he acquires his new pistol, identifying “the new Walther” in a Chinese spy base before sailing off to his final confrontation with the bad guys. The Walther P99 enjoyed modest success in the US, gaining a small but fairly loyal following.

At the 2011 SHOT Show, while still being imported by S&W, Walther announced the new PPQ pistol. The PPQ wasn’t an entirely new design, but rather represented the evolution of the P99. The new PPQ impressed me at SHOT 2011, and I hoped that it would catch on and gain more support than the P99. It wasn’t much of a surprise then when in 2012, Walther announced that they were creating Walther Arms, Inc to manage the importation and distribution of Walther products in the United States.

In June of 2012, Arnsberg, Germany based PW Group, owners of shooting sports companies, CARL WALTHER Sportwaffen and UMAREX Sportwaffen, announced the formation of Walther Arms, Inc. to handle all the importation, sales, marketing, distribution, and servicing of Walther products in the United States early in 2012. The transition will occur in two phases beginning in 2013. Previously, Smith & Wesson held responsibility for the distribution of Walther firearms and accessories in the United States. On January 1, 2013, that responsibility will transfer to the newly formed Walther Arms, Inc. (with the exception of the Walther P22 and PK380 models, which Smith & Wesson will continue to sell and distribute through April 30, 2013).

That information can be found directly on the new Walther Arms website, which of course brings this post full circle, to the new Walther presence in the US. Since the launch of of Walther Arms, Walther in the US has been ramping up the momentum considerable. New products from Walther include the Mark 2 PPQ, which changes the magazine release to the more familiar button style along with other improvements; the PPX, an entry level polymer pistol; the PPk/22, and of course continuing the P99, and PPS line. They also have launched an aggressive advertising campaign to spread the word about their products to shooters that may not have been aware of the volume of Walther’s product offering. Finally, they announced a new 5 inch model of the PPQ, something that will appeal to competition shooters and should be available late 2013 or early 2014.

The future is looking bright for Walther in America; new products and control of their own distribution and destiny could combine for a couple of big years for the German arms company. We look forward to following the American developments of this classic brand.