One of my favorite movies is The Patriot. While the movie takes a number of historical and firearms liberties, it’s overall a solid effort. One of my favorite scenes is when Mel Gibson’s character is getting ready to ambush the Crown infantry column holding his son captive. He tells his other two young sons to “aim small, miss small.” 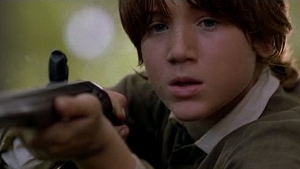 The idea behind “aim small, miss small” is to pick a reduced target area on a larger target. For example, when shooting British officers in 1776, you could aim for the gold clasp worn around the uniform’s neck instead of just aiming for the torso at large. When your goal is to hit the upper torso, for example, picking a smaller target on that region increases your odds of success.

However, the real reason I like the “aim small, miss small” line is it gives me a commonly understood pop culture reference for explaining one of my favorite concepts in shooting, the low percentage target. The genesis for this post was a conversation I was having on Friday with Stephen Pineau of M3 Strategies; we got on a tangent talking about using reduced targets to train and the advantages and disadvantages therein. One of the biggest advantages of using reduced targets is for shooters with limited training area. A 2 inch dot at 3 yards is the same target area an 8 inch circle at 12 yards presents. Obviously, this is great if you’re using airsoft or dry fire, but there’s also an application in live fire as well.

One of the drills I like to use when I’m doing live fire training on a single lane is the iHack drill. It’s a single-lane indoor range friendly version of the Hackathorn Headshot standards, and it’s 1) fairly difficult at my skill level, and 2) shot using 2 inch dots as the target. Shooting the iHack at 3 yards on a two inch dot forces me to really aim hard and drive the gun hard in transition when I start from the holster, because three seconds is not a lot of time. The hardest part of the iHack drill for me is getting the draw to the first dot; because it’s a three shot, three second string, if I don’t nail my draw in around 1.2 or so I’m going to feel rushed for the remaining two shots.

I genuinely like using reduced targets for dry fire and live fire training; whether it’s a 3×5 index card for practicing head shots or a 2 inch circle for working on body hits, using a reduced target for training can help you go faster when it really counts.