Everyone is selling firearms lube these days. And the marketing speak that goes with some of these “new” products is pretty ridiculous. Seriously, if I have to read one more press release about how AmphibianGlide is going to wick into the pores of my 1911 and provide miraculous lubrication under any circumstances, I’m going to shoot someone. 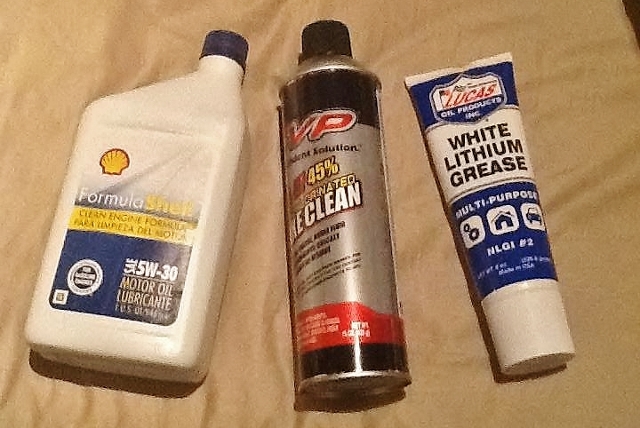 The biggest problem I have with all these products is that they don’t do anything that I can’t do with the three products in the photo above. From left to right: 5W-30 engine oil for lubrication, non-chlorinated brake cleaner for cleaning, and white lithium grease for well, grease. The lithium grease and 5W-30 will last for 3 years or so, and have a combined cost of less than $10. Meanwhile, four ounces of Miracle Grease will cost you anywhere between 20 and 40 bucks. That’s crazy talk. Think about that cost spread out over the course of three or four years. If you shoot say, 5,000-10,000 rounds a year through your competition gun, you’ll go through an entire one of those little lube bottles in a year. That’s 20 bucks. You’ll go through it quicker if you shoot rifle and pistol. So you’re looking at maybe $40 a year, which isn’t a lot of money in the grand scheme but is also a couple more boxes of ammo to train with.

I wouldn’t have a problem with paying an increased price for weapons lubricants if they actually offered performance advantages over motor oil and lithium grease. I will say that for gun cleaning, don’t use brake cleaner on your polymer guns unless you want to mess them up; but for metal guns it’s generally good to go. But back to the main point, which is why bother? The only reason I can think to use a product specifically designed for guns is because it comes in a handy dispenser tube, and with motor oil you have to buy some plastic syringes to apply it neatly. Or you could class it up and buy an aluminum precision oiler

I’m not trying to bash gun lubes, because there are plenty of good ones on the market. I’ve used Gun Butter, Wilson Combat Lube, 10-8 Performance Lube, and even FrogLube. They all work just fine, but they don’t work any better than products designed to work inside a V8 at 4000 RPM.