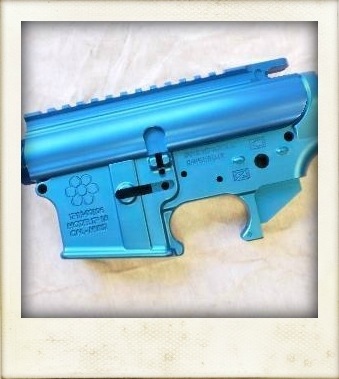 As I mentioned on Monday, I have begun collecting parts for my AR build. The lower parts kit has arrived and the lower receiver is on the way, but every other decision has been a hotly debated point. A “slick sided” upper receiver is within reach, but I’m concerned about the lack of a dust cover. Then again, I think a forward assist button is obsolete now-a-days, so I’m not convinced that an A3 upper is the way I want to go. If I were to take my own advice from pistol shopping, I would weight the importance of each decision and then focus on those that really count. However, that isn’t going to work this time, because I want to build an AR-15 that is, frankly, awesome to shoot, but, then again, I really really care, how it looks!

My AR will be turquoise. A color that I find irresistible. For now, the color is the only, really girly thing about my build. It should be a show stopper and I can’t image any other bling will be necessary. But I’m not going to make any promises I can’t keep, either. I’m sure I’ll get a few looks at the range, but, what else is new?

The predictable comment I am expecting is: A gun is a tool, how it looks shouldn’t matter! I’m sure this statement will come from a guy, because a girl just wouldn’t, and I will respond, “tell me about the rims on your vehicle.” I would think guys, being visual creatures, would better understand our desire to surround ourselves with all things pretty. Things that look good, make me feel good, I don’t know if that makes me shallow, and I don’t care. When it comes to my guns, the better they look the more I’ll take them out. The more I take them to the range, the better I’ll get at shooting them. I can’t imagine anyone will have a problem with that.