One of the big misconceptions about USPSA is that it’s all about “sprinting around” and hosing bullets at targets as fast as you can. While there will certainly be some stages that are short range blaster stages, the truth of the matter is that in USPSA, accuracy matters. It matters quite a bit. 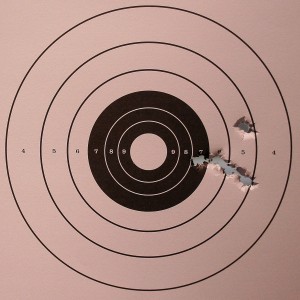 Let’s look at Production division, and the scoring system. In Production division, a hit in the A zone is worth 5 points, a hit in the C zone is worth 3 points, and a hit in the D zone is worth 1 point. The way USPSA scoring works is based on points per second; for example in a 24 round field course if you shoot 95% of the available 120 points, you’d have 114 points. That would mean you’d shot no more than 3 Charlies on the stage. If you shoot those 114 points in say, 19.50 seconds your points per second, or Hit Factor would be 5.846.

If it was true that blasting through the course hosing bullets was what USPSA was all about, then it would stand to reason that you could complete the stage with much poorer hits, but by virtue of speed still get a higher hit factor. Let’s look at that for a moment. Say you just 75% of the available points – which would equal shooting 15 Charlies on a 24 round stage. No Production shooter would be happy with that many C hits, and to get a better hit factor on the stage with just 90 points you’d have to complete the stage 15.25 seconds, a full 4.25 seconds quicker than the shooter who shot better points. 4.25 seconds is a long, long time in USPSA for shooters of equal skill level.

Okay, so maybe 75% was bad. What about 85% That would be just 9 Charlie hits giving you a total of 102 points. To beat the guy who shot 114 points in 19.50 you’d need a hit factor 5.85 or better, for rounding’s sake we’ll just go up to 5.900. The ballpark time to win the stage with only 85% of the available points shot would be 17.29 seconds; you’d still be trying to find a 2 second advantage on the guy who shot more points. Assuming for the moment that the guy with 95% of his points didn’t make any major mistakes where you could easily pick up time, finding two seconds is going to be tough.

The point is that in USPSA, accuracy matters. Whether you’re C class trying to win High C-class at Area 5 or a GM trying to crack the top 16 at Nationals, competing against other shooters in your skill level means you’re going to need to get good hits.