In part 1 of the series I talked about the different kinds of sponsorships and what sort of compensation you could expect. Today, we’re going to look at the process of actually getting a sponsorship. Part 3 on Monday will cover keeping your sponsorship, and finally part 4 will complete the series discussing the pros and cons of sponsorship. 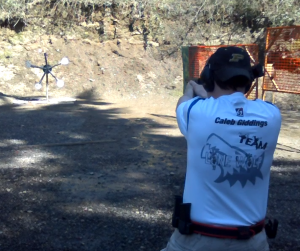 Here’s the big secret to getting a sponsorship – you have to ask for it. Very rarely will a company just roll up to you and say “hey, we think you’re cool, so here’s some money/product/coke to wear our logo and stuff at matches.” Now, that’s not to say that doesn’t happen, because sometimes it does. However that’s more likely to happen to an established shooter who is well known. Asking is frequently the hardest part for people, because it feels an awful lot like sales or hubris to walk up to someone and say “hey, I’m awesome you should give me money or ammo.” Of course, before you ask, there’s a lot of legwork you should do to increase your chances of getting a “yes.” The first thing you need to do is understand what sponsors are looking for.

The most important skill you can have for a sponsor is the ability to represent their brand well. Are you personable? Do you have an established presence online? Most sponsors don’t really care if you win a match or not as long as you don’t look like a clown using their gear. What a business cares about when they invest money in a sponsored shooter is the value that said sponsored shooter is going to deliver back to the business. So when you’re preparing to ask someone for a sponsorship, you have to be prepared to explain the value you offer them. It’s also tremendously important to understand that what constitutes value for a small regional ammo manufacturer is quite likely going to be very different than what a company like Ruger or S&W considers value. Here are some examples of things that I’ve seen considered as value in the past:

I intentionally listed “shooting skills” as the least on that list, because frequently it is. Let’s say you’re trying to get sponsored by Bob’s Ammo Company. Bob’s Ammo company is trying to grow their business and get people to buy ammo from them – so Bob’s doesn’t necessarily care about the 20k-ish USPSA shooters, they care about 3 or 4 million recreational gun owners that buy 100 rounds of 9mm and go to the range. So to show value to Bob’s Ammo, you have to be prepared to demonstrate that you can help them grow their marketshare through your shooting activities. For example, if you point out to Bob’s that you get 2,000 hits per week on your youtube match videos, or that you’re willing to help them manage their site SEO to help rank better in Google.

Being attractive is a controversial item to put in there, but it’s also true. You can generally tell when someone’s looks, male or female, were taken into account when you hear things like “it also doesn’t hurt that they’re easy on the eyes.” It’s an ugly truth, but being easy on the eyes helps get sponsorships. If you remove all the other variables from the equation – two shooters of roughly equal talent with roughly equal resumes are competing for the same sponsorship. Both male, but one is 50 lbs overweight, while other one is in top condition. There have been actual business studies that show that the fit, attractive dude will be hired over the fat guy, even when a dude is doing the hiring.

Luckily though, looks aren’t as important in this industry as they are in other industries. The most important thing to remember as you’re seeing a sponsorship is value, value, value. What value can you as a shooter offer to a prospective sponsor? Once you figure out your own personal value proposition to a company, all that you have to do after that is get out there and start selling.

(Editor’s note: I specifically omitted discussion of “good buddy” style sponsorships, where a friend within an organization makes the sponsorship process happen. The focus of these articles on the process of getting sponsored via a more granular process.)