I’ve had literally an email requesting that I watch and do a Gun Nuts Movie Review of Iron Sky, aka Space Nazis from the Moon. Since the general concept of “Nazis in space” sounds pretty rad, I decided to go for it. I had to get a 20 mile bike ride in, and with the outside temp only 4 degrees figured that hitting play on my iPad and watching Iron Sky would make a boring stationary bike ride a little more interesting. 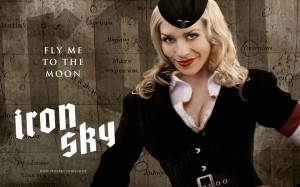 Boy was I wrong. I could really sum up my thoughts on the movie with this sentence: “more space-Nazi face-shooting, less moralizing about how bad greed/war is.” Honestly, there is almost zero space-Nazi face shooting until the last 30 minutes of a 90 minute movie. Everything before that consists of ham fisted jabs about how Americans would totally elect a Nazi if the campaign was packaged right. There is one really good scene that’s a send-up of the now internet famous bit from Downfall, but other than that the first hour of the movie just sort of plods along.

Eventually there’s a big space dust-up between the Nazi fleet of space zeppelins and the good guy fleet, led by the Americans. Unfortunately, it’s far too short to save the movie, and once it is over, the movie goes right back to pointless moralizing about the horrors of war and/or greed. I could also talk about how the one black character in the movie is just a terrible collection of racist stereotypes of black people, but I’ll chalk that up to the movie being Finnish.

Honestly, this is a movie that took itself far too seriously. I understand that science fiction is often used as a window for social commentary, but what Iron Sky had was an opportunity for awesome space Nazi fights and to showcase how hot Julia Dietze is. They did a reasonably admirable job of the latter, and a piss poor job of the former. If instead of trying to tell a story about greed and war they had just been “hey, let’s have space Nazis fight America and this chick will be hot” it would have been a bad movie, but it would have been one of those bad movies that’s fun and entertaining. Instead, you get 70 minutes of sermonizing, 20 minutes of space fights, and a stupid ending. But hey, Julia Dietze is still pretty hot.