While surfing the internet this morning, I happened upon a video on a training group’s facebook page that was pretty comical. It had all the usual stuff you’ve come to expect from the latest crop of tactards – aggressive shoulder roll, paint by numbers movement, pretty much nothing out of the ordinary. I was ready to just laugh and move on with my day until I saw their dry fire video. 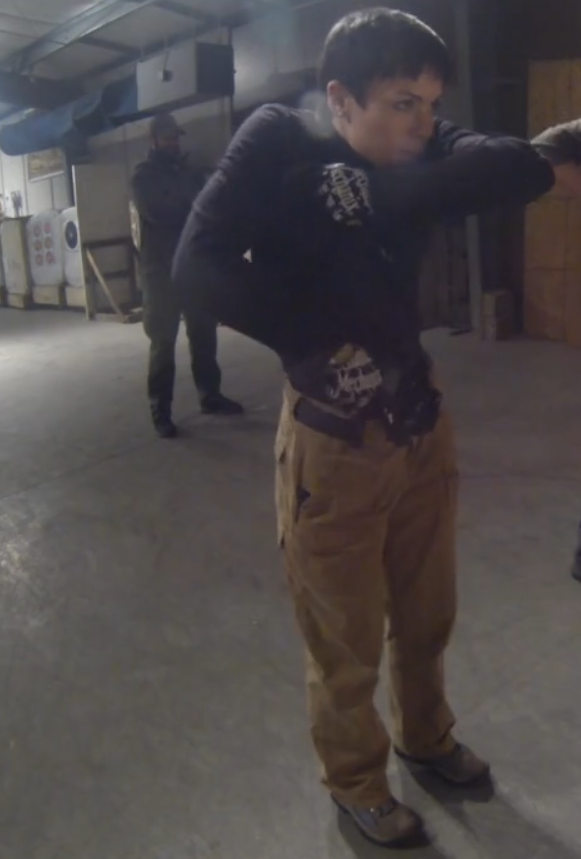 I pulled a screencap from the video so you can see it in all its terrible glory, but that right there is a no-look appendix carry re-holster technique. Now, I try not to get down on people who are trying to learn to shoot better, and I don’t know the woman in this video either. I’m sure she’s a nice woman with the best of intentions, but that shit right there is dangerous. I’ve never been a fan of the speed re-holster trend; there are all sorts of phrases I could toss around reinforcing that, but the simple statement is that there is no prize for being the first person back in the holster after after a shooting.

This discussion only applies to people who aren’t law enforcement officers, mind you. I can accept that there are times when a cop may need to reholster his or her gun while maintaining eyes on a suspect. That’s cool, I’m totally down with that. That’s also usually done in a large duty holster, and not an appendix rig where the business end of the gun is pointed towards your femoral artery.

The act of holstering, regardless of holster position should be a deliberate action, separate from the shooting action. The argument that you should keep your eyes on the threat while holstering your gun is just stupid, because if there is still a threat you shouldn’t be holstering your gun. If it’s time to holster your gun, then you can spare a glance at your holster to make sure nothing’s going wrong, especially if you chose to carry in the appendix position. Most instructors teach some kind of deliberate pause before holstering the gun, this gives you a moment of time to compose yourself, get your thoughts right, and get your finger out of the trigger guard. This gets even more important if you’re wearing gloves, because you lose some of that tactile sensation in your finger, even if you’re wearing the super tactical mechanix gloves.

I’m not trying to break this woman’s metaphorical balls specifically; but rather put the focus on a dangerous technique that seems to be catching on because it looks cool. Yes, it does look cool to slam your gun into your holster without looking, for the same reason it looks cool when the 2nd baseman flips the ball behind his back to the shortstop after fielding a ball in the gap between 1st and 2nd to kick off a 4-6-3 double play. But unlike baseball, where the risk is not getting the lead runner, the risk of a speed holster is actually shooting yourself, and that’s just not cool.

When you put your gun away, take a moment. Pause. Reflect upon the beauty of life and nature. Take a second to make sure the holster mouth is clear of obstructions. Then deliberately holster your gun. I’m a huge fan of “doing things that look cool”, but I’m an even bigger fan of “not shooting myself”. The speed no-look holster involves too much risk of the latter to be worth the former.