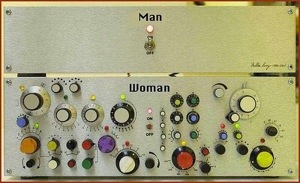 It started out as a simple observation. Whether it was a guys first time to the range or he was the kind that lived there, if somebody said to him,

“Wanna shoot my incredibly large caliber, kick like a mule, loud ass gun?” His response would be in the extreme affirmative. Women are different. We build on our firearm knowledge one step at a time and move up only when we’re ready. They way I like to put it:

Men want to feel power, Women want to control it.

I spent months with a rented .22 before I tried anything else. After that I focused on 9mm till a friend gave me some instruction with his 45. Now, there isn’t too many calibers from which I will shy away, but I’m glad I spent those first months easing myself into shooting.

For one thing, the fellas don’t seem to get all that attached to their firearms. They are always trading them in, checking their value, and rarely doing the kind of personalization that might making one less sell-able. We ladies seem to do far less trading around. We spend a long time making the decision of what gun to buy but once made, we stick to it. With respect to a concealed carry gun, we may even go so far as to incorporate it into our wardrobe. After all, if it’s something we plan to wear everyday, we’re probably going to want it to express us at least as well as our outfit. Never-mind that it will inevitably be concealed, in our tighter fitting silhouettes, whether my ccw is black or pink, neither will be easy to hide.

Women also tend to have a psychological reaction to guns. It may be a small subtle change in her. For example, for me, and other women I’ve met, guns brought out our girliest qualities. We started to embrace more commonly associate feminine items and behaviors, than we had in the past. Maybe we were countering all the testosterone surrounding us, or maybe it was an unrelated coincidence, but many of us noticed a desire to bedazzle our range gear or paint a gun our favorite color. All kidding aside there is an emotional factor for women, within the act of shooting. Not only can it feel empowering and exhilarating, learning to control a powerful tool, but when considered as part of her personal defense, one must remember the physiological drive in women to protect her family.

These are just a few of my observations about men and women at the gun range. My generalizations may not describe you or anyone you know, but I believe there’s a little something to them.