While not a lot of new products were introduced at SHOT this year, it’s fair to say that one of the new products was the darling of the show, and that was the Sig Sauer MPX. The LE/Military version and a couple of the civilian versions were on display at the SHOW, and were constantly surrounded by a crowd of onlookers, for good reason. 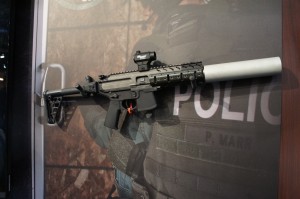 The Sig MPX civilian version was brilliant in its sheer ballsiness; what you can’t see in the above picture is that the can on the gun just screws off, leaving you with a 7 inch long “muzzle brake” for a 9mm carbine. That makes the civilian version perfectly legal with the worlds biggest 9mm muzzle brake on it, and then for an additional 200 bucks plus tax stamp, Sig will sell you the screw on attachment so you can a suppressed version. Pretty awesome. But there’s an interesting story behind the MPX, and it starts with the Heckler and Koch MP5, actually.

Here in the USA, sub-machine guns have largely fallen out of favor for LE and military use, with most big agencies opting for short barrelled carbines as CQB weapons. A noted exception is the US Secret Service, which rocks the FNH P90, but for the most part you don’t see a lot of subguns out there. The same isn’t true overseas, where the 9mm submachine in generally and the HK MP5 are extremely popular with law enforcement and military for a variety of reasons. The problem however is that the MP5s out there are getting long in the tooth, and for whatever reason HK doesn’t really want to keep making the MP5 and would prefer to make and sell the MP7 (of Recoil fame). That’s a problem for a lot of Euro and African countries that use the MP5 specifically because 9mm is cheap and readily available almost everywhere; switching to a weird boutique cartridge like 4.7mm would screw up their supply chain.

An anonymous source with inside knowledge of the international defense industry told me that in the next two years, thousands of MP5s are going to reach the end of their viable service life, and at least for now HK seems relatively uninterested in replacing them with more MP5s. This creates a hell of a market opportunity for a company like Sig to step into with the MPX, with an established market looking for a gun that’s similar to the MP5 in terms of performance and ergonomics. The MPX in my opinion improves on the MP5 by using AR15 style controls, which are relatively easy to teach and learn.

The civilian versions will be a carbine, an SBR, and eventually a pistol version. No word yet on availability or MSRP.