Press release from The Tactical Wire:

North American Arms is pleased to announce the reintroduction of the Guardian pistols designed to chamber NAA’s proprietary bottle-necked cartridges, the 32NAA (380ACP case) and the 25NAA (32ACP case). “Our new manufacturing capability has enabled us to assure our customers of regular production and a timely supply this popular platform,” explained NAA’s President, Sandy Chisholm.

“As personal protection specialists, we felt it was our role to pioneer this important development to create a new benchmark in extreme high-performance handgun ballistics. We were supported in this task by Ed Sanow, editor of Law Enforcement magazine and a recognized ballistics expert, as well as the team at Cor-Bon, a company whose brand is synonymous with high performance ammunition,” Chisholm added.

As an example, the 32NAA cartridge pushes a 60 gr. Hornady bullet in excess of 1200 feet per second from the 2.5″ Guardian barrel, generating almost 200 ft. lbs. of energy. Serious students will find that compares very favorably with virtually any ammo/gun combination in the pocket pistol category. Full specifications and test information can be found at http://www.naaminis.com/index02.html 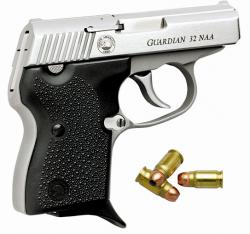 I’m honestly ambivilent on these guns – although I do like the concept of a .25 caliber bullet at 1200FPS or whatever absurd number it’s rocking at – I’m generally opposed to boutique cartridges.  They’re more expensive than traditional cartridges, which means that shooting the gun (the most important activity with a carry gun) is going to occur less, and less shooting is never a good thing.

That being said, I also love capitalism.