A little background on previous discussion of the thumbs forward pistol grip (aka high thumbs and Todd Jarrett kung-fu grip) involved a little bit of talk on how it can be less than ideal on revolvers.  I actually use this when shooting revolvers, because my hands are the right size to lay my thumb along the frame without it going forward of the cylinder gap and getting burned.  What’s interesting though is that I’m not the only guy that shoots a revolver like this, as this photo (courtesy of Yamil Sued) of Craig Buckland from the recent IDPA 2010 Indoor Nationals shows. 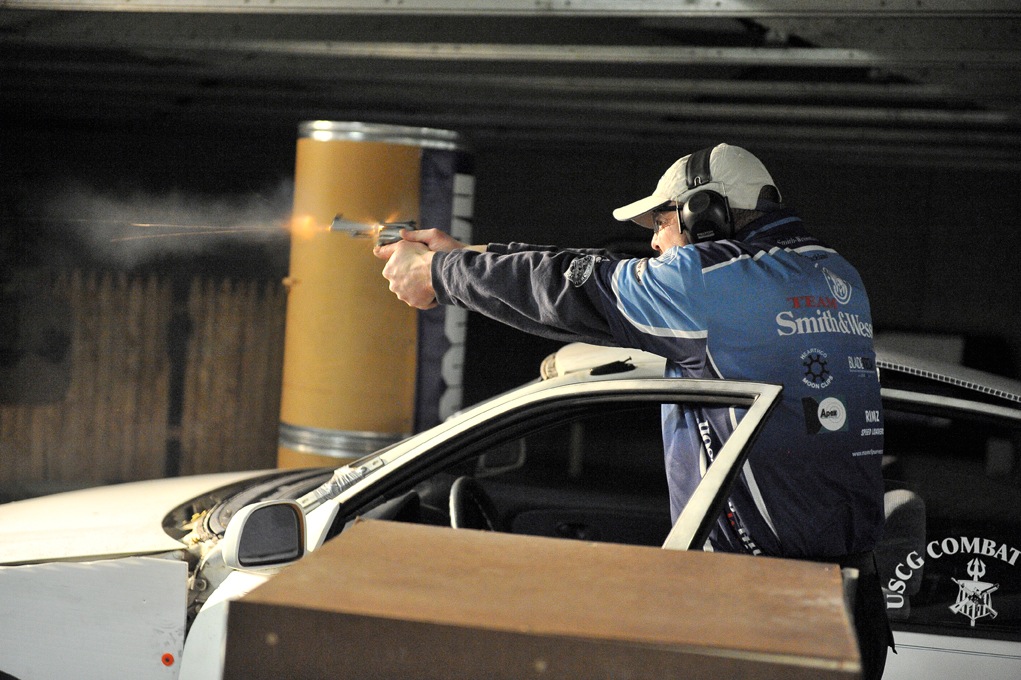 What’s cool about the photo is that you can actually see the flash from the cylinder and that it’s mostly directed up and away from the shooter’s thumb.  I’m not saying that you should switch and use this grip, because what works for me may not be your ideal solution.  However, even for revolver shooters, the thumbs forward grip is clearly viable.

In the picture, Craig Buckland from Team S&W is shooting his Model 67 in .38 Special using the thumbs forward grip.  The bullet has left the barrel and the gun is already back on target for a follow up shot.  Now, admittedly a .38 doesn’t have a mighty amount of recoil, but the way the thumbs forward grip works helps to eliminate much of the “follow up” time on your splits (the time inbetween shots).

As mentioned though, the thumbs forward grip can result in a slightly toasty thumb.  As a matter of fact, if you click the picture for fullsize, you can see that Craig’s thumb is a little “cajun style”, and my support hand thumb gets pretty dirty when I shoot as well.  Make sure that your support hand thumb isn’t near the forcing cone and you’ll avoid burning yourself.

If you are interested in revolver shooting though, try out the thumbs forward grip.  It’s the same on revolvers as it is on semi-automatic pistols, and allows for better recoil control and faster follow up shots.  Try it out next time you’re shooting and see if you get better results compared to your current gripping style.  It may feel a little weird at first, but once I switched, I haven’t looked back.  Locking the support hand thumb down in the position illustrated engages the muscles in the support arm to better control recoil and muzzle flip.