Here we go, it’s time for me to do a Ruger GP100 10mm Match Champion review. I’ve actually had this gun for a while, and I’ve shot it a bunch more since the video in the header. Spoiler alert: I like it. Also spoiler alert: I’ve modified it. Not a lot, but some. Should you buy one? Yes.

It’s sort of difficult for me to be impartial when I’m doing a review like this. The GP100 10mm Match Champion review is tough, because everyone knows I like the GP100. I used a regular GP100 in IDPA, then switched to the first generation of Match Champion guns with fixed sights, then when they dropped the adjustable sight models I bought one of those in .357. Of course I like this gun.

But why does this gun even exist in the first place? The first Match Champion in .357 made sense – designed to shoot IDPA matches and ICORE Classic division. But this gun came out with the Match Champion branding after USPSA killed 6 shot major revolver and after IDPA combined revolver from two divisions into one. Why even make it? Well, two reasons – one, because 10mm is enjoying a bit of a comeback. A bunch of companies are offering 10mm guns, and even though it’s a niche round, it does have a dedicated fanbase. Two, I think Ruger is interested in selling revolvers to revolver super nerds like myself, and something tickles my fancy just right about a 10mm GP100.

At this point you’re probably like “okay how does it shoot?” Good news: it shoots great. I shot a couple of sub-2 inch groups at 25 yards with 10mm Hydra Shoks. Once I drop a Wilson Combat spring kit into the gun, the DA trigger pull goes down to 8lbs and the SA trigger pull is 2.75lbs. Of course, that makes it a “Federal primer only” gun, because Federal primers are the softest in the game, but that’s okay. It’s not like I’m carrying this gun to defend my life. 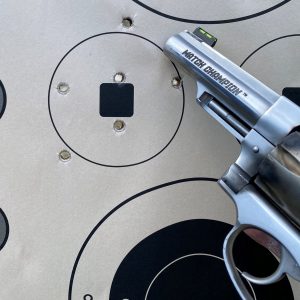 During the Ruger GP100 10mm Match Champion review, I discovered where the gun shines – as a competition gun. If you’re willing to spend a little money and order some .40 S&W moonclips from TK Custom, you can run .40 in the gun. Let me tell you, that is a blast. With 180 grain FMJ the recoil is easier to manage than polymer .40s. It takes .40 and makes it pleasant to shoot. Especially if you spring for the Federal Syntech 205 grain .40 Action Pistol load. Shooting those rounds, at 20 yards I was able to get consistent 2 inch groups, and the recoil is easy. It’s like shooting a soft .45 out of a nice 1911, nothing to think of.

As a competition gun, the GP100 10mm Match Champion is a little lost in the world. As I mentioned above, USPSA killed major power factor revolvers a while ago, and IDPA merged their two revolver divisions. You can still use it in IDPA, but I think that .38 revolvers have an advantage in that game. Regardless, my plan for 2020 before the ‘Rona hit was to use it for an entire IDPA season, culminating at Nationals.