Yes, I have recently grown a mustache. It’s pretty great, reminiscent of the glory days of cop mustaches. Somehow, it’s granted with me extraordinary powers as well. Allow me to explain. 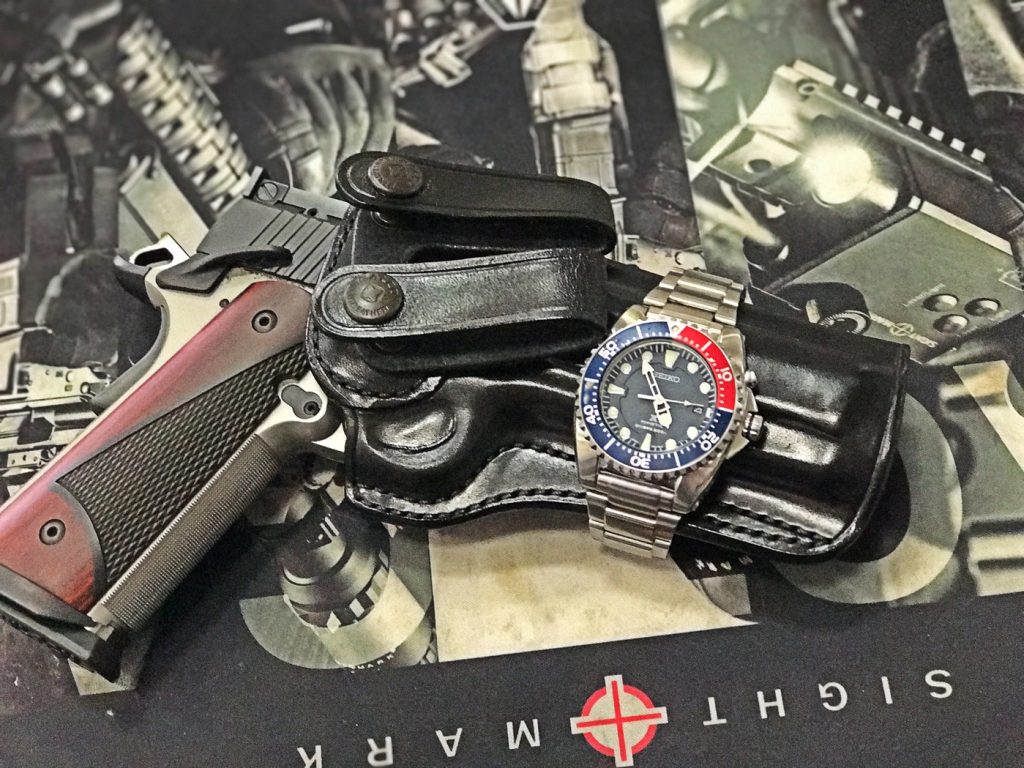 I have been testing 1911s for almost 2 years now, and for the majority of that time I’ve been using a Shaggy AIWB holster by Custom Carry Concepts. After nearly two years of continuous use, my Shaggy died. Sad face, I know. I ordered a replacement from JM Custom Kydex, because they make a 1911 holster with a wing claw and that is awesome, but it’ll be a while before it gets here. In the meantime, I’ve gone old school, and I’m carrying the rig you see in the picture. A 1911 in a Galco Summer Comfort. Like I said, that’s about as old school as you can get with a concealment holster, and every time I buckle it on I feel like I should be hanging out with Benicio Del Toro getting into gunfights in Mexican whorehouses.

Which sort of brings me around to my point. I’ve never really been that good at working from concealment with one of these rigs, but I figured since I was going to be wearing it for a while, that I’d put some effort in. Using a closed front concealment garment with a traditional IWB holster has always sucked for me, to the point that I did a video about how much I suck at it compared to appendix carry. However, I figured today I’d put in some work on the range with it. My results started off where I expected, relatively slow draws from concealment, but as I worked on it, and worked on it, I was able to get my draw from concealment down to about 1.50 with a solid hit on an A-zone at 7 yards.

Single shot draws are pretty meaningless though, which is why I started focusing on two shots, failure drills, and Bill Drills. I still maintain that the Bill Drill is the single most relevant drill for self defense, and that it’s a solid measure of your ability to draw, and get rapid, accurate hits on a single target. After working on it for a couple boxes of ammo, I was able to get my draw and first shot under 1.50, and my Bill Drills consistently down to the 2.5 zone, with a couple sneaking in to the 2.3 range. Is that as fast as I could shoot it from an open holster or an appendix rig? No, it isn’t. But for me it’s damned fast, especially from a method of concealment I’ve struggled with in the past.