I say why not? We here at Gun Nuts are simply trying to appease the ghost of John Moses Browning.  We feel such appeasement is necessary given that most people flock to polymer wonders and shun ole’ slab sides.  Simply put, the 1911 can be an excellent projectile launcher and if well-built, it is an exquisite work of art.  It can also be a source of endless frustration and malfunction drills if poorly built or improperly maintained.

So it was with your interest in mind – or maybe it was the fact I really liked this pistol and wanted to try it – that we open up the testing on the Dan Wesson ECO.  This will be a kick-off review.  As I write this, I have yet to actually shoot the gun.  This is a quick bench top, initial impressions review.  My goal is to track the rounds fired and give updates as the weapon either proves itself or infuriates me.

Now for you heathens that don’t know; Dan Wesson was founded in 1968 by Daniel Wesson, great-grandson of D.B Wesson who co-founded Smith and Wesson.  In 2005 the company was bought out by CZ, who also makes quality firearms.  But enough history, if you want to know more about Dan Wesson’s history you can look here, or here.

The ECO is an Officer sized 1911, thus it is sporting a 3.5” tapered bull barrel and the requisite shorter grip.  Being chambered in 45 ACP the capacity is lacking, but frankly I don’t care.  With 7+1 rounds of .455 diameter ballistic goodness I can take on seven parachuting ninja (or is it ninja’s?) and at least one pissed off gopher.  Yeah, yeah, I know… no one has ever asked for less ammo in a gunfight.  Ironically I own a double stack combat autoloader for those causal jaunts through gangland, or into Syrian held territory. 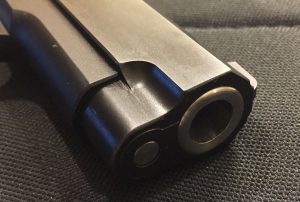 The ECO has an alloy frame which reduces weight.  In the past I have owned some lightweight 1911’s in both Commander and Officer length;  and while the recoil wasn’t life-ending it was definitely there.  I suspect this will be similar; however, the ECO comes with a flat wire guide rod setup.  Rumor mill says it is from Evolution Gun Works.  If that is true it is great news as I have read good things about that setup’s duality of increasing reliability while reducing felt recoil.  We shall see.

Here are the specs from Dan Wesson.

So what do I love about the weapon?

And what I hate about the weapon so far?

I really hope this short 1911 proves to be reliable.  I should be able to report back in a week or so with some rounds down range.  Dan Wesson recommends a break-in period, so I will not be performing the 10-8 test until I have put 400 rounds down range.

To say I want this to succeed is an understatement.  Time will tell.