710 rounds in and no failures of any type. The most recent range session was a simple, 200 round USPSA warm-up session using the excellent Birchwood Casey reduced USPSA targets. I’ve been using these targets to train with because they’re almost exactly half the size of a regular USPSA target; plus when I’m training on a single lane indoor range I can hang two of them on the carrier and work on transitions. Like my friend Annette says, “splits are for show, transitions are for go.” 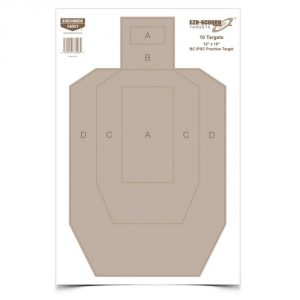 A couple of notes on the DW Commander. As mentioned, its reliability has been excellent with all types of ammo, including defensive hollowpoints and Freedom Munitions steel cased American Steel. One interesting item is that the Dawson Precision magazines that my Rock Island loves are not loved by the Dan Wesson. Sometimes they won’t lock the slide to the rear. The simple fix for this is to only use the 10 round Wilson ETM, which is what I’d recommend anyway. With the ETM, everything works just fine. Mags drop free, the gun runs like a champ, everything happens exactly like it’s supposed to.

Magazines are a huge part of 1911 reliability, and it’s also why I use the Wilson ETM as the “Control” magazine for all my tests. Some guns I’ve had will run with any mag. Some guns (coughtauruscough) didn’t run well with any of the mags. Some guns, like the Springfield and now the DW, are particular about which magazines you’re supposed to put in them. I won’t ding a gun for being unreliable until it won’t work with the Wilson ETM. Then, and only then do points start coming off. Which reminds me, I need to buy some more of these magazines.

The Dan Wesson Valkyrie keeps chugging along! We’ll soon hit pause on this test as the gun takes a trip to Fairfax to be included in an upcoming issue of American Rifleman, but once it comes back we’ll pick right where we left off. In the meantime, my Kimber just happens to be sitting at my FFL waiting for me to get my grubby little mitts on it.