For Part 2 of Project Lumen we will review the notes and data points from the first three lights tested.

During the testing I learned a tidbit that is specific to my house, is wholly irrelevant to this test, and does illustrate the need to actual test your home and don’t fall into the trap of presumption.

This was the brightest light tested so far and the initial illumination or “light on” wasn’t a problem with my groggy night sight.   It was definitely bright; but not blinding or over-powering.  The illumination was very good and I had no problem seeing what I needed to see.

The 180 lumen LED provided a quality white illumination, and while it made for some hard shadows, the overall light provided was excellent.

The reflectivity off the walls was not bad at all.  The interior walls of my house have an egg-shell sheen so that clearly comes into play.  If the walls in my house were high gloss; or if I was up against a door frame painted with gloss trim paint, there might be a problem.

This was the best light tested so far.

At 45 lumens this is easily the dullest light of the test.  The illumination was just weak; even with new batteries installed.  Initial “light on” wasn’t a problem because the overall light was dim – very, very dim.

As with the ProTac LED, the color was a vibrant white hue and overall provided the bare minimum amount of light to do the job.  With only 45 lumens, reflectivity was virtually zero and as noted above, the overall effect on my night sight was minimal.

While the Streamlight Microstream is a good light, its worth as a defensive light is questionable.  It is better than nothing, but so is a candle, sans the fire hazard.  I still think this is a decent flashlight for EDC, but I would not make it my only light by the bedside. 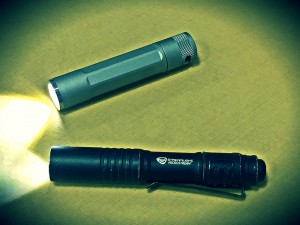 The XS Micro and Microstream chillin’ on some Kevlar and Nomex aircraft paneling.

This light was not purchased for any other reason than I liked the way it looked.  The color is reminiscent of Titanium, even though it is not.  No, my excuse for this light would be those times I am really dressed up, such as weddings and funerals.  I never had self-defense or serious use in mind when I purchased this flashlight; so of course I tested it.  At 80 lumens, I felt it exploring its capabilities as a defense torch was warranted.

Similar to the Micro Stream, the initial light was not blinding or over-powering.  At 80 lumens the XS Micro was better than the Microstream.  In fact, it was quite a bit better, more so then the difference in lumens would suggest.

Oddly, the LED cast a bluish hue to the environment; not a major issue, but the illumination was not as “clean” as the ProTac or the Microstream.  For those that don’t know, the human eye has the most difficulty seeing blue illumination when compared to all others.  Click here for more information.

Finally, the tail cap was difficult to actuate.  This is not a review, but this was readily noticeable while drowsy.  I still think it looks cool, and now that I am aware of its shortcomings, I can better decide when to carry this sexy little light.

With these three low power flashlights reviewed it is obvious that anything less than around 150 lumens is too weak for real consideration. (Hint – the 100 lumen NEBO has already been tested too)  At no point was my night vision affected and I learned several key points on the way shadows are cast in my house.

Next time I will review the NEBO, the 275 lumen Streamlight PolyTac and Streamlight NF-2 with an incandescent bulb and only 78 lumens.

I look to future parts with the following questions: