You see the truck in the lead photo?  It’s mine, and while the damage may not look all that bad, it was. So, what does my wreck have to do with guns, self-defense or shooting?  Simply put, it means nothing.  And everything.  That wreck gave me an epiphany, but I’ll get to that later.  First, I think it is important to understand my mental capacities leading up to the wreck, so we may better understand the epiphany.  Let me provide a quick background.

On March 2, 2016, my wife and I awoke our two boys for school like we do every day.  My oldest, who is nine, complained of a sore throat and had a fever – we were sure it was strep.  Neither I, nor my wife, could take off from work that day and since my wife works in the dental industry and sees patients, my oldest got to tag along with me.  Having my son at work with me was neither bad nor was it stressful.  No, my stress didn’t start its ascension until 3:44 when I received a phone call from our daycare.  They called to inform me that my youngest son, who is five, was running a fever and vomiting.  They needed me to pick him up post-haste.

No problem! I get off at 4:00 anyway.  With fears of cleaning vomit from my truck, my oldest son and I left for the daycare.  We made it three miles.  While driving down a road where we clearly had the right-of-way, a woman came down the freeway off-ramp and ran the stop sign.  The lead photo was the result.

Surprisingly this isn’t an article about situational awareness.  I actually saw her coming down the off ramp and she seemed to be slowing down;  I had no reason to believe she wouldn’t stop.  My son, being a crude young male, said a funny fart joke, so I looked at him for a second.  When I looked back, she was on me.  I screamed “SHIT” and mashed the brakes just as we hit – hard.  I saw her careen off my truck from the driver side window then I looked up and noticed the airbags deflating.  It was both serene and terrifying.  I have been in bad wrecks before; but never have airbags gone off and NEVER was my child on board.

I promise, the epiphany is nigh!

I gathered my wits and composure, kicked my now wedged door open and then struggled to get my son’s door open. (Unbeknownst to me at the time, the cab was twisted due to frame damage)  Once he was out I realized we were in the middle of a busy underpass and I had no safe place for him to stand.  My mind was racing as my wife wasn’t answering her cell phone and our youngest child was likely still vomiting at the daycare.  My stress was extremely high, but I remained calm.  I am a stark realist and I am well aware that panicking is a waste of time and effort.  I can bottle up things with the best of them. 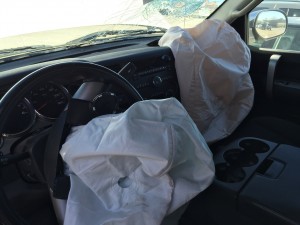 I corralled my son, left a message with the receptionist at my wife’s office and checked on the other driver, a young woman who was injured.  She would ultimately leave by ambulance.  The local police arrived on the scene quickly as we were close to the police station.  I was able to put my son in a squad car for safety and I felt some relief.  As I surveyed the scene and took stock an officer pulled me aside for questioning – that is when it happened.  It was something I had never experienced before following any other car wreck.  It was an event that led to the epiphany.

Upon seeing my son’s face, panicked and teary-eyed, in the front seat of a squad car, I became a stuttering fool.  I was babbling.  I was stammering.  My speech was jumbled and I must have sounded drunk as I struggled to find my words.  I failed to remember my own phone number, my wife’s phone number, and even the name of my employer.  Granted this only lasted 3 minutes or so; but it became an almost out-of-body experience.  It was like I was watching myself; and in my mind I was giving harsh smart-ass commentary over my own incoherence.

For as calm as I had been seconds before, I was woefully unprepared for the overwhelming release of stress when I realized everything was secure, my son was indeed safe, and we were going to be OK.  I was crashing from an adrenaline rush and it was unlike any I had ever known.

I was mentally falling apart after things were calm following an auto accident.  A simple, stupid, automobile accident!  I do believe the vector for my stress filled breakdown was not the accident, but the fact I had been so worried for my son up until that point.  Immediately after the impact I was alive like never before.  Alert to everything, focusing on nothing; and now I could relax.

The epiphany came quickly, and the thought was both sickening and enlightening.

“How would I be acting or responding if I had just used my CCW to defend myself or my family nearby?”

“Anything you say can and will be used against you in a court of law” – Miranda.

Just because you haven’t been read your Miranda Rights doesn’t mean what you say is inadmissible.

“I don’t know what happened.”

What do those sayings all have in common?  They imply accidental discharge.  Negligence.  And negligence is the key ingredient to man-slaughter.  The facts are simple.  We can never know how we will truly react to a situation until we are in it; but at what cost do we risk not trying to mitigate all possible outcomes?

In my wallet I have a card from Texas Law Shield.  On the back of that card is written the following:

“The holder of this card invokes their Rights pursuant to the 4th, 5th & 6th Amendments to the U. S. Constitution, all applicable provisions of the State Constitution, and all applicable provisions of the State Codes and Statutes.  Any questioning of this individual must be immediately suspended and shall be continued only in the presence of and with the advice of legal counsel.”

Strong words, and while I have never been one to “lawyer up”; the simple fact is what you say following a self-defense situation may have ramifications that are far-reaching and costly.  This is not meant to be an advertisement Texas Law Shield, or for any other such service; it is meant to provide food for future thought.

In as little as three minutes after the wave of stress came over me I was more or less back to normal.  Three minutes where I could have said things that the best lawyer in the world might have had trouble dismissing.  Simply put, if was being interviewed by an officer following a self-defense event, I would rather hand them a card to read, then to open my mouth and increase the lawyer fees an order of magnitude.

I have been looking into some ways to mitigate the after action stress, but Mr. Benjamin Franklin was correct when he stated “surely an ounce of prevention is worth a pound of cure”.  Pay attention, avoid stupid situations, with stupid people, at stupid hours.  Finally, if the balloon goes up… keep your mouth shut until someone who is both calm and collective can prevent you from verbally hanging yourself.

Within the training community you will find a rare few that “get” the needs of a CCW.  Their teachings might not be as cool and as flashy as the 3 day AR class, but they are more important.  Entertrainment is fun, but carrying a gun is serious business and we should all look for training that supports realistic goals – at least when starting out.  For your CCW training you should seek out trainers that realize the differences between the needs of a civilian vs law enforcement vs military.  A list would include the likes of: Claude Warner, Tom Givens, Grant Cunningham, Massad Ayoob, Greg Ellifritz.  They are instructors who base their teachings on actual case study and reality.

Have I trained with any of them?  Unfortunately not yet; but you better believe they are on my short list and they are well ahead of a lot of entertrainers.  They should be on your list as well.

What happened with my son?  He was an emotional wreck for a few hours but there was no permanent damage – and I Thank God for that.

Are you curious about the truck?  The impact on the front wheel bent and twisted the frame something fierce; it was deemed a total loss.

Be safe out there, and be sure those you love know it.  I mean that, sincerely.