In my series on The Folly of Chasing Gear and The Folly of Chasing Gear – CCW Gun, I revealed that I have changed my CCW gun a myriad of times and I switched competition rigs three times. I never recommend swapping carry (or competition) guns that frequently; nevertheless, I have developed a reasonable method for evaluating and then learning a new handgun. Humans on whole, are stubborn, and will chase the newest trinket, even though evidence proves we should not. With this in mind, I have decided to pass on my methods. I have broken this topic into two articles. The first, this one, will cover the evaluation phase which crosses the boundaries of CCW and Competition. The second article will be on methods that I have used to “learn” your new competition gun faster.

When we first get a firearm, after the initial excitement wears off, I tear them down, inspect and clean them, and then slather them with my favorite lube. I do this no matter the gun. In the past I tried the “from the store to the range” thing and on more than one occasion it resulted in malfunctions that could have been prevented with a little cleaning and lube before the first range session.

For the first rounds shot through any handgun, even a competition firearm, I head to a well-lit square range and bring at least 200 rounds of quality practice ammo. I will generally take two different bullet weights and shoot the same drills to see if the gun prefers one to the other.

For the drills, I shoot some close range bullseye, some long-range bullseye and I will generally do some other accuracy base drills, such as a Dot Torture drill. It is important to note that none of these drills involve a par time. After that I will run some rapid fire, maybe 12-15 rounds worth. Next I will load a round, remove the mag and ensure there are no extraction/ejection issues, I do this at least ten times. Finally I shoot it strong hand and weak hand while intentionally limp-wristing it, trying to make it FTF or stove-pipe. 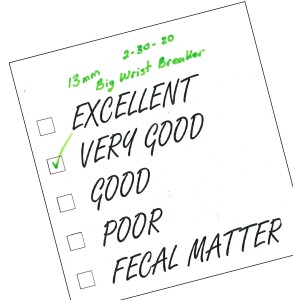 Doing this provides me feed-back in the following areas.

Is the gun unreliable? Does it malfunction without the mag? Does it malfunction while being limp wristed? If the answer to any of those questions is yes, then I generally stop here and try some different ammo. If I still have failures then it is time to do some soul-searching and determine why. Did I purchase a piece of junk (Kel-Tec) or is it just a lemon from a known good brand? An example of a lemon would be a first series Gen 4 Glock with Brass to Face issues.

How does the gun handle and recover in recoil? I will openly admit this is subjective and those who are new to shooting will find this less meaningful than an experienced shooter. So I mention this with the presumption that the reader knows how to properly grip and drive the gun. Does it recoil in linear fashion or is it all over the place? Do the sights return to aiming point each time?

If it is miserable to shoot and it causes you to flinch, this is the time to identify it. Read: S&W J-Frame AirLite in .357

For a production based competition gun this isn’t important as the recoil spring will be tweaked anyway. For a purpose-built competition gun, like a 2011 or an Open gun, then it better damn well be perfect!

More accuracy is better – ALWAYS! This will be predicated by your own skill level, but the gun should at least make you look good. If the target looks like you shot it with .355 diameter buckshot, something is wrong. Perhaps the trigger is crap? Perhaps the gun hates the ammo? Perhaps the gun is crap? A crappy trigger is easy to tell but bad or the wrong weight ammo takes some experimentation. A gun that is a flat-out turd can be harder to diagnosis without more ammo. This provides solid reason to research your purchase and flat-out avoid the cheapo, bottom-of-barrel guns.

While on the subject of accuracy, we need to determine of the sights are regulated for preferred sight picture. I don’t believe this is a pass/fail proposition as much as an indicator that you might want to change sights. I denounce 3-dot sights when I can, so I basically have to change or modify the sights on every gun purchased.

While shooting did the gun bite you? Does the gun make you bleed? This could be caused by something as simple as a sharp edge that can be easily blended, or it could mean the firearm doesn’t fit you and likely never will. As a rule I don’t keep firearms that draw my blood while shooting.

Are the controls reachable? If you can’t reach the mag release then you may have problems. Is your grip keeping the slide stop from engaging (SIG)? These are very personal things to evaluate and honestly, most of this can be worked out at the gun store counter, long before you fill out the Form 4473.

Finally, how does it carry? Of course, this requires a holster. To be honest I don’t buy a holster until I am sure I like the gun and I have a solution to the sights either planned or ordered. Once I know I will be keeping the gun, I will order a holster that suits my needs. I have found you can carry a lot larger gun than you would expect by having the correct holster and a good belt, but alas, that is a thought for another day.

Using these methods a person can rather quickly determine if a firearm will be their forever friend or a bitter regret; one they re-live with each trigger pull. For those that shoot competition, my next article will go over some things I have done that have shortened the learning curve after changing platforms (ooh, sounds tactical).