For Part 2 I am going to cover more gun related mistakes, or missteps.  In all honesty, the first time concealed carry holder has more avenues for research and advice than 11 years ago.  One need only look at the internet and you can find scores of websites that simply didn’t exist in 2005.  Compare that to what is available now; sure, there is a lot of crap out there, but one trends the information you will see common areas of agreements.  That is a clue.  With that in mind, I am going to come right out and offend people. 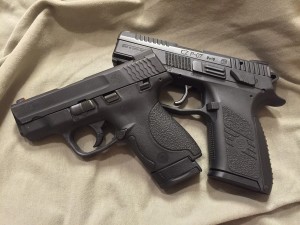 A LOT of people love the 40 S&W; I am not one of them. There is a common misconception that it was created to fill the void between the 45 ACP and 9MM, but that is not fact. Following the 1986 Miami shoot out – a shoot out was so pivotal the FBI actually made a training video about it – the FBI realized they needed to replace their venerable revolvers.  The FBI worked with with Smith and Wesson to develop a handgun that shot reduced power 10mm loads in a S&W 4506 frame.  Smith and Wesson promptly realized the reduced powder load meant the 10mm cartridge could be shortened, and thus the 40 S&W was born.

When it was developed and placed into service in 1990 and into the early 2000’s the round offered a significant advantage over 9mm in power and 45 ACP in capacity. But as time marched on that advantage against the 9mm has grown less and less.  With current 9mm ammo the advantage of the 40S&W pales against the disadvantage of 1-2 less rounds, harsher recoil and greater ammo cost. To be fair I never had a problem with any 40 S&W I owned, but I don’t regret selling them and buying the 9mm’s either. In my experience most people shoot the 9mm better and quicker than a 40 S&W in equally sized firearms. If you want to shoot big bore because you think you really need it go with 45 ACP or 10mm; alternately you can move to a revolver and load up 41 or 44 Magnum and carry a gun that will cause you to list to one side.

Sidebar: the 40S&W seems to have found a solid home with competition shooters because it can be downloaded while still making “major” power factor.  This gives the competitor a softer recoil and more rounds than an equivalent gun chambered in 45 ACP.

Lesson #4: The round was losing favor with instructors when I bought my first gun chambered in 40 S&W, circa 2007. Nevertheless I bought it based on the advice of people who should have known better. In all honesty I can’t say I wouldn’t follow the same route if starting over in the same period of time. But if starting out now, I wouldn’t even bother.  Get a 9mm with modern ammo and be done.

I can already hear the Glock fans warming up their gaming computer in their mom’s basement to let me have it.  Let me open with a fact. The Glock is a fine weapon and I have no beef with it from a functionality, accuracy or cost perspective. I just don’t shoot them well; and I can safely say it is me, not them. Not one to give up, I disregarded the fact I don’t shoot them well and have owned 5 different examples over the years, including models G22, G27, G26, G19, G26 again and a G35 (the G22 and G35 were not for CCW). I spent a lot of money and ammo trying to make them work for me instead of focusing on a platform I shot well. In all fairness I recently had a chance to shoot my cousin’s G23C and was pleasantly surprised to see I shot that Glock better than any other.  I am positive it was the result of being a better shooter overall. I find them to be as exciting as a framing hammer, but if you were dropping me off in Beirut tomorrow they would be on my short list of handguns too take.

Lesson #5: Recognize when something isn’t working for you and stop trying to make it work. This isn’t a hot rod, or a race gun, this is a tool that might save your life. If there is another reliable, quality firearm you shoot better, go with it instead.

Yup, I’ve owned one and can safely say the PF-9 was the single worst firearm I have owned. That thing would malfunction just looking at it. Again, I bought this after reading some magazine reviews. FAIL. I literally have nothing good to say about this gun. The Yankee Marshall has a video where he declares it the worse handgun ever with his reason being the damn thing is marketed as a CCW weapon where as other cheap guns don’t hide their lack of quality. He is 100% correct!  My copy was laughably bad and  research shows that experience is beyond commonplace.

Lesson #6: This is the gun that opened solidified my disdain for gun magazine reviews. It opened my eyes to the lack of scruples in some writers. Going back now, the article that sold me on the PF-9 was written in a way that wasn’t praise, but didn’t come out and call it junk either.

As I noted last time, through all of the guns I bought for CCW, and through all the rounds fired, one thing remained constant. I was wasting money on guns, transfer fees and holsters that would have been better spent on defensive classes and practice ammo. When it comes to your carry weapon, chasing the latest gear rarely gains you skill and is seldom worth it in the realm of firearms.

In Part 3 I’ll go over some mistakes in gear to try to give first timers a better start than I had.

For those that care, here is a list of the guns I have owned and since sold or traded on my CCW journey. This is CCW only.  Yes, they are many and varied…I know…

Kel-Tec PF-9 (I should have thrown it in a lake or burned it on a stake!)

Kimber Series 1 CDP (I have since bought the same gun back, but it is only a range toy now)