So the president has decided that he’s going to take “executive action” on gun control, and naturally he had to give a big self aggrandizing speech to announce his intentions to the world. It’s impossible for this guy to open his mouth on guns without telling some whoppers, so let’s have some fun and count the ridiculous lies he and his administration are pushing today.

You can indeed find guns advertised for sale on the internet from distributors like CDNN, but it’s not like Amazon prime. You cannot simply fill your cart, check out, and have the gun shipped to your door no questions asked. CDNN is still bound by applicable federal laws and will only ship firearms to someone who holds the proper category of Federal Firearms License. They even have an entire page of their site dedicated to explaining the process:

“After deciding which firearm(s) you want to purchase you’ll need to choose an FFL Dealer that the firearm(s) will ship to in order to complete the 4473 transfer. Communication is an important part of the transfer process, before you process an order you should contact the selected dealer and review their specific transfer procedures. Please be aware that it is customary for a dealer to charge a fee for this service and that transaction is between you and the transfer dealer, you do not pay CDNN Sports the transfer fee…”

So a violent felon cannot, in fact, buy a weapon over the internet from CDNN and get it shipped to their door “no questions asked”.

There are also a number of auction sites like Gunbroker dedicated to firearms and accessories sales…but here again, federal laws still apply. Some of Gunbroker’s users are FFL holders who use the site to auction their wares to the larger public. Some are private individuals moving an item or two in their collection to fund other things. All of them are still bound by federal and state laws. Bob in Ohio cannot advertise his cool shotgun and then ship it to Suzy in Virginia when she wins the auction. He can legally ship the gun to a FFL holder local to Suzy. The FFL holder takes the gun, enters identifying information about the weapon into his bound book, and then Suzy has to fill out the 4473 form and undergo the federal background check as well as filling out any state level forms and undergoing any state required background checks. In the Commonwealth of Virginia the state police have their own background check system that piggybacks off of the federal NICS system.

So if Suzy is a violent felon, she cannot, in fact, buy Bob’s weapon and get it shipped to her door, “no questions asked” using an auction site.

Or a web forum.

All the firearms laws apply all the time…even when the transaction begins on the internet. Bob and Suzy cannot cross state lines to make that transaction happen without breaking the laws already on the books.

That “recent study” was put out by “Mayors Against Illegal Guns”, Mikey Bloomberg’s group. You remember Mike Bloomberg, right? The guy who actually violated federal law by sending “private investigators” to make straw purchases at gun stores in various states? The same Bloomberg who has funded specious “studies” to argue his point of view before? His group Mayors Against Illegal Guns has hit a rough spot or two because some of those mayors are apparently not quite so stringent about following other aspects of the law. Like not holding a 20 year old you’re trying to sleep with hostage and shooting off a gun in the house. Or not taking bribes. Or not hunting for child pornography on the internet.

So we’re expected to believe that MAIG looked on Arms List and compared “wanted to buy” entries with criminal records to find that 1 in 30 people on Armslist were criminals looking to buy guns. Because I’m certain that everybody who placed those ads on Arms List included all the information you would need to do an accurate criminal background check in the ad, right? Like putting their address, date of birth, full legal name, and social security number up there for all to see?

And how many of those supposed criminals that MAIG found in their little study were reported to the authorities and prosecuted, do you think?

But nevermind all that, let’s just take MAIG’s word for it. I mean, the guy vouching for it is the same guy who said that if you like your doctor, you can keep him! It’s not like he would lie to us or anything, right? 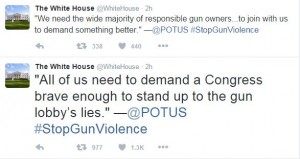 “The gun lobby” in and of itself is a lie. The NRA is not some alien entity that descended from outer space one day. It is an organization made up of millions of individuals interested in preserving their Second Amendment freedoms from people exactly like this president. It is funded by their voluntary contributions. “The gun lobby” is a bunch of people who are motivated and politically involved…just ask all the politicians those people have thrown out of office. The wide majority of responsible gun owners are not going to join with people who are blaming them for “carnage” and actively trying to find novel ways to turn them into felons while gangbangers who are actually killing people get slaps on the wrist.

Congress is comprised of people who aren’t willing to pass more gun control precisely because a bunch of them really want to keep their job and they know that ticking off all those millions of gun owners (the NRA’s formal membership, as big as it is, doesn’t account for the millions upon millions more who view the issues the same way) is not conducive to keeping their job.

Contrast that with the billionaire-funded Bloomberg pushes which have lots and lots of money but little to no popular support.

You really do, chief…because right now what you have is a country with a whole bunch of voters who know you’re lying through your teeth about “safer gun laws” and will remember any attempt to pass them come election time.

The term “gun violence” is itself a magnificent little bit of fiction. It includes all kinds of “gun violence” like armed felons being killed by the police or law abiding citizens in justifiable acts of homicide. It also includes suicides.

Suicide is certainly a terrible and tragic phenomena, but it is not one that can be blamed on guns. If you look at the CDC’s numbers for 2013, you will note that there were 41,149 suicides that year. 21,175 of those suicides were accomplished with firearms…which is about 51%. Japan has about 1/3 of the population of the United States but they had more than 25,000 suicides in 2014 giving them one of the developed world’s higher rates of suicide (higher than in the US) and in a society where there is almost no private ownership of firearms…and this is a consistent feature of Japanese society from year to year.

Suicide is being used in a pretty shameless political ploy to make “gun violence” seem bigger because suicides (someone killing themselves) outnumbers homicides (someone killing another) by a margin of almost two to one in the US. The people who used other methods like overdose or suffocation or automobile just aren’t as politically useful, I suppose. But note that we don’t hear about suicide prevention…just gun control. Because people taking their own life isn’t really the issue unless you can use that to try and push gun control that everyone acknowledges wouldn’t have made one damn bit of difference in any of the horrible events he cites in his speech.

There are, of course, more lies…but I’m running out of time and space so we’ll have to make due with just these four whoppers he’s trying to sell on Twitter.

He wants voters who are disappointed in their leaders…fine.

I suggest we make our disappointment with this ridiculous power grab known. If you are not a member of the NRA, join this week. If you are already a member, donate at least the cost of a box of ammunition to the NRA-ILA. Don’t give these bastards an inch.