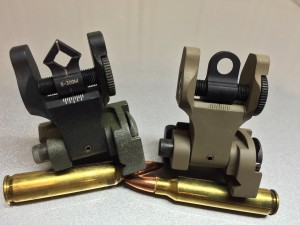 Four or five years ago I decided to ditch my A2 carry handle and put a Troy BUIS on my AR.  Being new to the AR platform, I thought it would be a good idea to purchase the Troy BUIS with the Di-Optic Aperture (DOA) instead of a standard A2 aperture. Fast forward to 2015 and I have put enough rounds down range comparing the two apertures that I feel confident in offering an experience based opinion.

Yes, I know Troy Industries has made a lot of people mad with the hiring and appointment of individuals with polarizing backgrounds, but they still make a good product. I’ve found many of the people who say they’ll never send another dime to Troy are often the same ones that don’t bat an eye purchasing crap made in China by an oppressed people under a communist regime.

What is the Di-Optic Aperture? I’ll let Troy Industries explain:

“The DOA™ key design strength lies in its rhombus-shaped aperture, which centers the eye on the front post instantly and effortlessly. In a heartbeat, the shooter zeroes on the target and is ready to fire. Circular apertures simply cannot produce this effect. The DOA™ optics, coupled with Troy Industries™ legendary battle-ready toughness, provides a dramatic advance in shooting speed, accuracy and reliability.”

Sold!  I can safely say, after shooting a standard A2 carry handle and the DOA side by side, that my eyes prefer the standard A2 Aperture. As for ruggedness and quality, the Troy BUIS is solid as a rock and works as advertised.

I had two main issues with the DOA, issues that were also noticed by some friends that shot my gun with the DOA sight installed.

In a nutshell, the Di-Optic Aperture made it harder for me to make accurate shots and I damn sure wasn’t any quicker on a timer. I can solidly recommend the Troy BUIS for their durability, but in my opinion, stay with the standard A2 aperture and your training time and money can be used to improve other skills, instead of learning a new sight system.

As for me, I am selling the Di-Optic and sticking with the A2 unit in the photo.