In the United States the car plays a central role in the life of most citizens…likely moreso in the United States than in any other country on earth. Getting your driver’s license at 16/17 years old is considered an important milestone. Having one’s own car is such a symbol of independence that teenagers work entry level jobs to save up enough money to buy one. It’s considered such a crucial part of life in most of the country that we even allow people who have been convicted of drunk driving, one of the most lethally negligent activities you can engage in, to continue driving under some restrictions because it is believed that completely banning them from the roads would cause undue hardship.

The vehicle likely features prominently in your life…but does it feature prominently in your self defense preparations? A great deal of crime takes place in close proximity to vehicles. Robberies in transitional spaces like parking lots are extremely common in some areas. Gas stations are always a popular target for criminals looking for a score:

These things happen because people are typically extremely vulnerable when they are in close proximity to their car. When people are heading to or away from their vehicle their attention is usually not on the immediate environment. They are almost always in possession of valuable items like cell phones, cash, purchases from stores, prescription drugs, and the keys to the car itself. When you combine the visible presence of valuables, a fixed location, and a lack of attention by potential victims it’s bound to draw criminal interest.

Knowing that bad guys see opportunities when you are in close proximity to your vehicle, what do you do about it?

FPF Training has put together a course on Vehicle Environment Skills to help you address vulnerabilities and deal with the potential worst-case scenarios involving a vehicle. Our instructor for the class was “Chris” who brought a lot of valuable insight from his decade and a half of active duty service in a SOF unit to the class. The focus was entirely relevant to the concerns of the average citizen or police officer functioning largely on his/her own in the vehicle environment.

We started with the basics: Awareness and avoidance. People have a tendency to head directly to their car when they leave a building, often in a direct and completely predictable path. They also tend to use the ubiquitous car key fob devices to unlock or start their cars from a considerable distance away, giving any predator on the prowl plenty of time to set up an attack. Instead of doing this, “Chris” recommended applying a counter-surveillance technique of taking an indirect path to the car that allows you to note anyone changing their movements to follow yours. Something as simple as heading a couple of rows over from your car and then making a turn to get there will often reveal who is paying too much attention to you. Not activating your car’s controls until you are right on it also avoids telegraphing your destination to bad people. I’ve used this technique a time or two myself, appearing to go to a vehicle that wasn’t mine to reveal a couple of ne’er-do-wells who probably weren’t interested in talking to me about Jesus at 12:30 AM in a Wal-Mart parking lot. 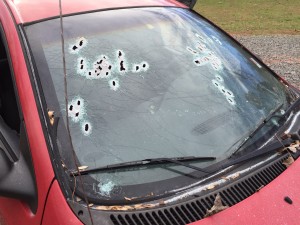 When it comes time to actually get into the car, “Chris” encouraged actually looking around the car first. It sounds simple, I know, but almost nobody actually does it. I encourage you to look again at the first video I posted and notice how the bad guys were using the victim’s own vehicle to obscure their presence and intentions. Think about actually getting into your car…how often do you actually take a look around before opening the door and starting to get in? There are plenty of examples of criminals hiding on the far side of a vehicle and then maneuvering on the victim as they enter the car. Then the next thing the victim knows, there’s a bad guy between them and their open door when they are ready to close it…and now they’re trapped in a severely disadvantaged position.

You’re still vulnerable once you are in the car if the car isn’t moving. I routinely see people get in the car who will then fiddle with their belongings or look at their cell phone for an extended period of time. Head down, doors unlocked, and the rolling weapon they could use to escape a problem is in a completely immobile condition, turning a potential defensive asset into a big metal cage-like liability. Instead, once you are in the car get the doors locked and the engine started and be ready to move immediately. You are much harder to hurt if your door is locked and you can use the skinny pedal on the right to move a minimum of a ton and a half of metal instantaneously.

I occasionally have to use a drive-up ATM and on those occasions I will actually leave my car in gear the whole time. If somebody pops out with an intention to do any mischief, they’re going to have a dickens of a time accomplishing it when I’m driving away.

The worst case scenario, of course, is being stuck in the car while it’s immobile. We trained for that, too:

Note a couple of things: Firstly, that it is possible to successfully engage someone through the intermediate barrier of windshield glass. Secondly that doing so will profoundly impact the trajectory of the bullet. The round you are using, the exact makeup of the windshield, and the angle it’s at all play a role in how much deflection you will get. As a general rule, expect that attempting to engage through the windshield beyond the end of your hood is likely to result in a complete miss…unless you put multiple rounds through the same hole:

Side windows are much less problematic:

The tempered glass usually shatters readily when a bullet hits unless there is some sort of window-tint film to contend with. It doesn’t usually have much impact on a bullet going either way. We spent a good deal of time rehearsing the recognition of a threat, maneuvering to get the pistol into play, shooting in the awkward positions seen in the videos, and safely exiting the car without giving the bad guy any advantages in the process.

Shooting is, of course, the last resort for the worst case scenario. Learning to recognize vulnerability around vehicles and minimize your potential for being caught unaware was the most valuable part of the course, in my view. In my experience even most police officers do not receive much (if any) training for the vehicle environment. It’s nice that there are companies like John Murphy’s FPF Training to make this kind of training available to police officers and law-abiding citizens from all walks of life.

Whether you take a course like this one or not, it’s worthwhile to critically examine your vulnerabilities around the vehicle and perhaps adopt some of the practices I’ve mentioned here to hopefully avoid ever having to draw your gun and shoot it out from your vehicle. Far better to avoid the problem altogether with attentiveness and common sense practices than to try to shoot your way out of the middle of it.