I am much more of a competition guy than a tactical guy. So I thought I would put forth some tips and tricks I have used to shave time off my stages. These are geared more toward the beginner; the person that wants to get better and is willing to train. 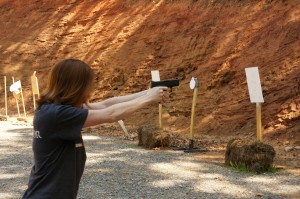 • For stage plans, watch the faster guys and mimic their plan; at least for now. When you get really good and you can estimate time better, you can work on options. Personally, I am not there yet, so why would I presume my plan is better than a GM’s? Find the smoothest way to get the most targets.

• Try to limit transitions to 20 degrees or less. This was a huge weakness of mine and it costs time, lots of it! This is amplified if you are running into a position, stopping and then having to transition 60 degrees.

• When you have a start at the center of a stage, don’t start on a target just because it is easy if you are going to come back by it again. I have played around with this in practice and have found starting on the “right” target vs the “easily accessible” target had roughly a 3 second difference in my time on a 22 round stage. The vast majority was spent on an extra reload.

• When moving short distances get low and take deliberate steps. I had a habit of hopping on short moves. Ben Stoeger calls it “tactical bunny hopping”. It kills stability and sight picture. Don’t do it in competition. Don’t do it in CCW training. Unless you are the Easter Bunny, don’t do it!

• When coming to a stop, after a sprint, I would stand upright and momentum would carry me onto toes. As I am neither svelte, nor a ballerina, there is zero stability in that maneuver. Instead, when entering a position, glide in horizontally; let the momentum plant your feet. This also helped with gains in accuracy and transitions.

• If you are moving less than 5 steps, KEEP THE GUN UP! It feels weird to move like that but is noticeably quicker and smoother on the timer.

• Similarly, if running past a barricade to a shooting position just on the other side of said barricade, get the gun on target before it disappears behind the barricade. When you clear the barricade, the gun is close to the target, you can quickly cleanup the sight picture and make noise.

• The old axiom, “Slow is Smooth, Smooth is Fast” is wrong! Smooth can be fast, slow is just slow.

Try these and you’ll realize some improvements in your game. I did.