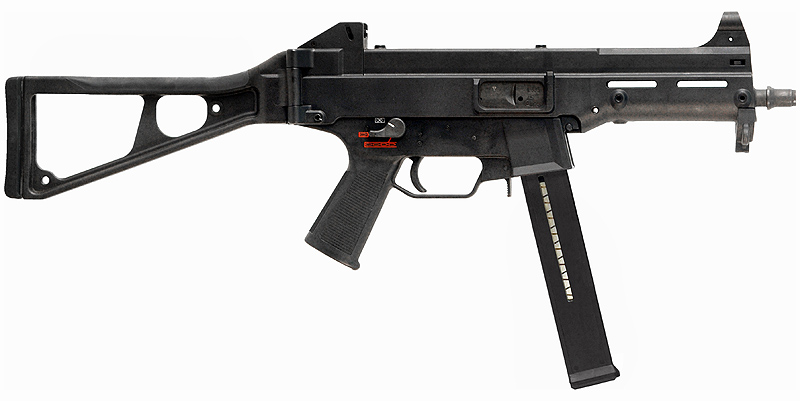 HK has a reputation for producing legendary sub-machine guns. The MP5 is the most iconic sub-machine of all time; however I’ve always felt that the UMP, especially the UMP45 was an awesome gun that deserved a little bit more love than it got. Recently, I had the chance to spend a lot of range time with a UMP45. This is my first time reviewing a sub-machine gun, so needless to say I was pretty excited.

First things first, let’s talk about the specs. The UMP45 is a select fire sub-machine chambered in .45 ACP. It has two fire modes, semi-auto and full automatic. It comes with notch and post style sights, and a 25 round magazine. The barrel is 8 inches long, which does actually maximize the ballistic effect of the .45 ACP round, although at the end of the day you’re still firing a sub-sonic pistol bullet. On semi-auto, the gun is very accurate, and easy to place rounds on target at ranges that you may find surprising.

Where the UMP45 really shines however is in close engagements on full auto. A lot of testing has shown that 2-5 rounds bursts are easy to control due to the gun’s slow rate of fire, which means that keeping muzzle rise to a minimum is a simple task. My experiences with the UMP45 were focused entirely around simulated CQB environments, with a lot of rapid movement, shooting on the move, and dynamic targets.

One are where I think the UMP45 does need a little help are the sights. As you can see, the notch and post sights aren’t great for contrast, and in low light environments can be very difficult to pick up targets that are moving quickly, wearing dark clothes, or being camping bitches. However, it’s a simple fix to add a good optical sight to the gun, I tend to prefer the Aimpoint Micro for applications like this. It’s a proven optic, tested pretty much to death by special operations and warriors. The Micro is light, and really improves the fast handling characteristics of the UMP45.

To really test the UMP45, I ran it through a number of dynamic scenarios, including a simulated raid on a cash vault, vehicle operations, and even a few squad based search and destroy operations. It performed flawlessly in every single environment, delivering .45 ACP rounds on target when needed every time. It’s effective engagement range is only about 50 meters, although I pushed it out to 100 a couple of times with okay results. But as I mentioned above, the HK UMP45 really shines as a CQB weapon in the hands of an assaulter looking to get in, do a ton of damage, and get out quick. It’s definitely my favorite weapon in Battlefield Hardline.