I have two humorous anecdotes that when tied together create a narrative that applies to our continued right to bear arms, and how we are frequently our most effective enemy. The first is a bit of self-mockery, as you know I live in South Dakota, and it gets cold here. I also have a dog, who needs to be walked. I am a dirty hipster and live in a downtown loft with no yard. 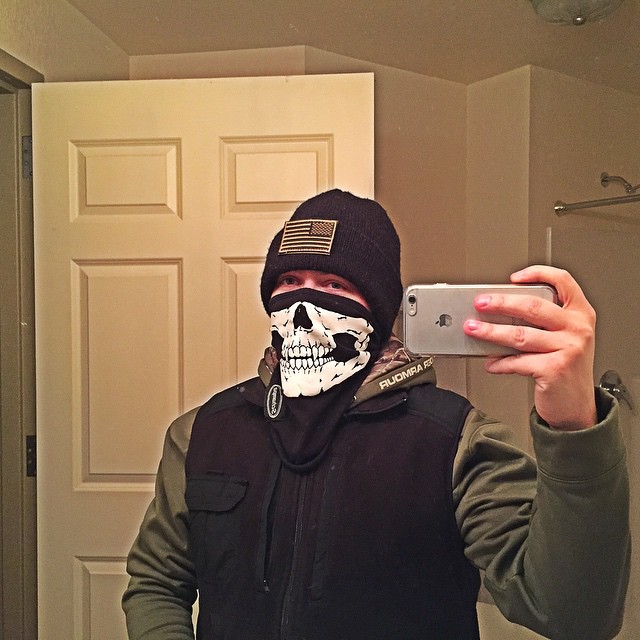 Because it’s windy, and half of the time I’m walking my dog directly into the wind, I grab my facemask, which I normally wear when I’m coyote hunting and generally not around people. I really didn’t think twice about it, because I’m walking the dog and it’s 10 degrees before windchill. Anyway, I’m out with the dog in front of my building on the public sidewalk, and I see a car stopped in the suicide lane, just…stopped. Which is unusual. I keep walking, I walk past the car, and I let the dog keep smelling, hoping he finds a spot to take care of business so I can go inside and commence the bourboning. About 2 minutes later, I get lit up from behind by an unusually bright light, turn around and see a cop car behind me. He slows down, cruises past me and checks me, then flips a u-turn and pulls over the car that’s STILL sitting in the suicide line. Right about then the dog does his business, so I turn around and head home, which gives me the opportunity to see the middle aged white people sitting in the SUV just mean mugging me. Since I now have the wind at my back, I’ve pulled down my facemask.

I concluded from context that the busybodies in the SUV saw me out walking the dog, concluded from my attire that I was up to no good, and called the one-time to report a suspicious bro. Which honestly is fair, because I’m 2500 meters from a park, and Albert House is katty-corner from our building. So there are shady dudes in that area at times, and with the skull mask up I looked the part. The cop saw me once I had pulled the mask down and he clearly saw the dog, so to him I’m just another urban hipster jerk walking his dog.

The point though is that I made a cardinal mistake: I scared the white people. Sometimes I’m the white people, and other times I’m the dude in the facemask with the scary pitbull. So I got the cops called on me, and had that offer not exercised good judgement, my night could have gone a whole lot worse.

The second anecdote is related, and takes a little explaining. I like video games, and I enjoying watching the Achievement Hunter Let’s Plays. For my older readers, I watch a bunch of people play video games and comment on the game/other things. It’s like a podcast with GTA Online in the background. Anyway, I was watching the latest GTA Let’s Play when one of the dudes, Jack, mentions how he was in the security line at the airport behind someone who was wearing an empty holster, and predictably being a total jackass about it. What’s interesting then is the byplay, because the people on the show are exactly the sort of people we don’t want to alienate. They all think guns are cool, and spend considerable amounts of time playing with pretend guns – we should be recruiting these people. But instead, their perception of 2nd Amendment activists is shaped by some SHALL NOT BE INFRINGED idiot in an airport who decided to do an empty holster protest. True fact: pissing people off and making them wait in long security lines because you want to wear your shitty DERPA holster to “educate the sheeple” isn’t going to win friends or political debates.

There’s a moral to this story, and how it relates to what I was doing. I was practicing a lesser form of idiocy, but idiocy nonetheless. I wasn’t thinking about how my actions, in this case my manner of dress, would be perceived by the monkeys outside my tribe. The same goes for Empty Holster Douche; although in his case I’d suspect that he was intentionally trying to provoke the other monkeys. But we both had the same result, we ended up frightening or annoying people that we shouldn’t want to alienate. It’s important to remember that as activists, and as people, our actions have consequences beyond what we can imagine or predict.

In closing: try to not do dumb things. Definitely don’t do dumb things on purpose, and if you’re caught being dumb, don’t be a hat made of asses about it. Actually, just ask yourself in any situation, What would Kory Watkins do? Then do the opposite of that.