Yesterday, much to the joy of Beretta fanboys (like me) Beretta USA announced the latest update to the venerable M9 pistol line, the M9A3. This pistol represents Beretta’s answer to the requirements for the Army’s proposed Modular Handgun System (or whatever they’re calling it this time around) and I am willing to bet that the Beretta M9A3 will absolutely be our nation’s next service pistol. But first, here’s what Beretta has to say about the new gun: 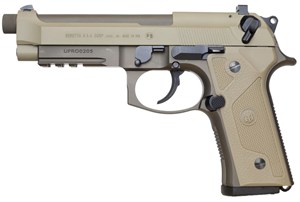 After delivering over 600,000 M9 pistols to the DOD and on the heels of being awarded a new contract for up to 100,000 M9s, Beretta USA announced today the presentation of the M9A3 to the US Army. The M9A3 introduces major improvements to the M9 that will increase the operational effectiveness and operational suitability of the weapon. The improvements include design and material enhancements resulting in increased modularity, reliability, durability, and ergonomics. They are being submitted via an Engineering Change Proposal (ECP) in accordance with the terms of the current M9 contract.

Made in the U.S.A. by an American workforce since 1987, the M9 has been the sidearm of the U.S. Armed Forces for nearly 30 years; serving with U.S. service men and women in training and combat operations throughout the world. The M9A3 is designed for the next 30 years – delivering 21st century capability and features while increasing usability and reliability.

“The M9A3 represents the next generation military handgun utilizing the best of the legacy M9 combined with proven COTS modifications that increase performance and durability” stated Gabriele de Plano, Vice President of Military Marketing and Sales for Beretta USA. Mr. de Plano added, “After listening closely to the needs of U.S. Army and other Service small arms representatives, we determined the M9, much like its counterpart legacy weapon systems (M4, M16, M240, etc.), was capable of being upgraded through material and design changes. The resulting M9A3 we are offering to the DOD will likely cost less than the current M9 and answer almost all of the Services’ enhanced handgun requirements.”

The M9A3 features a thin grip with a removable, modular wrap-around grip, MIL-STD-1913 accessory rail, removable front and rear tritium sights, extended and threaded barrel for suppressor use, 17-round sand resistant magazine, and numerous improved small components to increase durability and ergonomics, all in an earth tone finish.

“Furthermore, the M9A3 benefits from having a law enforcement and commercial variant that will be launched at S.H.O.T. Show 2015 in Las Vegas, NV” stated Rafe Bennett, Vice President of Product Marketing for Beretta USA. Mr. Bennett added, “The M9A3 offered to the DOD is the exact gun that consumers will be able to purchase in the second quarter of 2015.”

The M9A3 follows on the heels of Beretta and Wilson Combat’s collaboration, and represents a lot of the features that end users have been asking for in their Beretta pistols. The backstrap will allow users to switch from a traditional Beretta profile grip to the smaller and easier to manage Vertec style, the sights are replaceable, and the safety is convertable to a G-style decock only model. With this feature set, here are five reasons why the Beretta M9A3 is going to be the US service pistol for a long time.

1. Money
Hey, did you know that the military is currently undergoing all kinds of budget cuts? The Air Force (for example) by the end of FY 2015 will be at its smallest size since its creation in 1947, the Army is cutting costs wherever it can (despite getting new uniforms) so when Beretta presents a solution to the DoD’s desire for a new toy that doesn’t involve wholesale replacement of holsters, magazines, and small parts, the odds are that they’re going to go for it. Unless Sig nails the baksheesh.

2. Seriously, the money
Beretta did a smart thing: they submitted the M9A3 to the Army as an ECP, and engineering change proposal. What that means is that the M9A3 is part of the existing M9 contract now, assuming that the DoD accepts the ECP, which they will because follow the money.

In the Modular Handgun System proposal, the Army asked for a certain set of features on the new gun. The M9A3 has all of those features, which means that some bean counter in the Pentagon is going to look at this ECP vs the cost of an entire new handgun and go “well, this is a no-brainer.” Essentially, the M9A3 is presented to the Army as fait accompli by Beretta. “Oh, you want all these features in a gun? No problem Holmes, let’s just make that for you as part of the existing contract.”

3. We are not going away from 9mm any time soon
There are entire graveyards full of dudes that have been killed with 9mm ball ammo. Despite what the Warriors of the Keys will tell you, we don’t really need to switch up to .40 or .45, because in the FMJ form our line troops would be required to use, they still suck. To get serious though, we’re not ditching the NATO standard round any time soon. Everyone uses 9mm, and we are going to keep using 9mm as long as we’re the Big Kid at the North Atlantic Treaty Table.

If anything, the trend in rounds is towards smaller rounds. It wouldn’t surprise me if when I’m getting ready to retire in 30 years for the military to be issuing pistols that fire 5mm tungsten core beads to pierce power armor or something.

4. The M9 is fine
The big problem with the M9 (and the M4) isn’t the gun. It’s the way the military trains people to “maintain” their weapons. But that’s a post for another time. Fastidious attention to cleanliness at the expense of lubrication isn’t good for guns.

5. Logistics
All those mags. All those small parts.

Conclusion
There are circumstances where the M9A3 might not make it. The Army could, for reasons that are unfathomable to me, reject the ECP and force the MHS competition to go forward, and then pick a different gun. Sometimes they do things like that because of reasons, none of which make any kind of sense. But like I said above, I’m willing to make a considerable wager that in 2017, when the Army is supposed to pick its new handgun, the M9A3 will already be riding in frontline holsters, and doing just fine. Then it will be “this gun gives us what we wanted, so let’s just keep it.”

What do you think? Will the M9A3 effectively end-run the MHS competition?