One of the benefits of the recent uptick in concealed carry permits is a growing interest in obtaining training in the use of the firearm as a instrument of self defense. Quality training in the principles of self defense, the mechanics of using the firearm properly under stress, and the legal considerations attendant to the use of force in self defense can make a world of difference in the outcome you get from a bad situation.

When it comes to bad situations, it doesn’t get a whole lot worse than a close-quarters tangle with someone who intends to do you serious harm. The 0-3 yard realm of self defense is probably the least understood and least trained. When it is brought up many would simply tell you to not let a bad guy get that close in the first place. It’s certainly a good idea to keep potentially threatening people as far away from you as possible, but that’s not always the way things work in reality. You need at least some options for the close range fight…and you need good options, not goofy ones. I mention goofy ones because unfortunately there is no shortage of strip-mall dojo “black belts” out there peddling utter nonsense that looks really cool when they’re working with a cooperative student but that utterly fails when you try to apply it against a real resisting opponent.

Greg Ellifritz has considerable experience working against real resisting opponents both in training and on the street. For more than a decade the primary focus of his job was training his fellow officers in techniques that would help them prevail in a fight with violent felons. He’s widening the focus of his instruction to folks who don’t carry a badge these days, giving more people the chance to benefit from his program.

Speaking of law enforcement, let’s dispel a myth while we’re at it: the general public tends to think that police officers receive high quality training in hand-to-hand combat and the use of firearms, but nothing could be further from the truth. Most of the training that police receive with firearms and in defensive tactics is rudimentary at best IF they’ve received training at all. You’d probably be shocked at how many police officers are rolling on patrol today with almost no practical training in defensive tactics. Faced with limited resources and police officers of widely varying levels of physical fitness and capability, combatives and firearms training often gets very little emphasis in many departments. There’s some training in an academy setting but little ongoing training once an officer hits the streets.

Faced with almost stifling constraints on time and resources, trainers like Greg have to come up with efficient programs that teach enough to hopefully get an officer through a horrible situation on the side of a dark road one night. Greg has used his impressive training resume, personal experience, and what he’s learned from his martial arts background to come up with a targeted program of instruction designed to take somebody with limited (or completely non-existent) hand-to-hand skill and give them some useful defensive techniques for the undertrained and under-appreciated 0-3 yard range.

Greg himself is a 250 pound power lifter with 20 years experience in martial arts. I imagine wrestling with him is about as pleasant and productive as wrestling with a bulldozer…but his program does not depend on being that big, that strong, and that well trained to work. During much of the class my partner was a man older than me, almost 6″ shorter than me, and almost 100 pounds lighter than me. When we practiced defense against a disarm attempt he applied one of the defense techniques Greg showed the class and I was able to lift him completely off the ground and throw him around with little trouble…but I could not take control of his pistol. 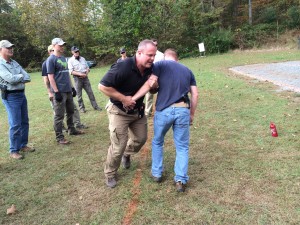 The class is a precision instrument…basic concepts are introduced, demonstrated, and then students practice them with partners as Greg circles around offering feedback and correction. The pace is fairly quick, but students spend enough time working through the concepts that they’re able to retain the information and since the layers build on one another they get enough time applying the fundamentals to even self diagnose when something isn’t right. Hip and shoulder position are crucially important if you’re trying to avoid being slammed to the ground in a fight and throughout the day I watched as some brand new students ingrained those fundamentals and began offering correction when their partner left themselves in a bad position.

The progression moved from basic hip and shoulder positioning to methods for achieving solid in-fight weapons access, protecting your weapon from an attempted snatch, snatching someone else’s weapon, and stopping someone else’s attempt to draw a weapon. Working with your partner you get to be on the giving and receiving end of the techniques enough to gauge how effective they would be. I was easily able to stop my partner’s attempt to take my gun, but when I had him lifted entirely off the ground shaking him without being able to make his pistol budge and inch it really hit home how effective Greg’s method is.

Greg doesn’t blow any sunshine up your skirt. He’s not claiming his program is going to make you a lethal street fighter in a day. What it can do, however, is give you the ability to buy some time to do enough to prevail in most bad situations. If you can effectively stop someone’s initial weapon grab attempt you likely buy yourself a couple of seconds to get a secondary weapon into play or to deliver some strikes that can get separation and distance enough to get your handgun into play as an asset rather than a liability. That may not sound like much but I assure you it’s much more than you realize…and it’s a lot better than the big fat nothing that most folks toting a gun have right now.

Nobody likes to think about the possibility of having to fight somebody for their gun, but it is a possibility. As I’ve mentioned in previous columns, bad guys do not come at you barking like a rabid dog from 50 yards out. They want to get as close to you as possible with some sort of ruse (Greg actually studied this in his area and found that the top 3 ruse requests are asking for the time, asking for a cigarette/light, or asking for change) and then they whip out the gat. Your odds of a happy outcome are much higher if your first thoughts about dealing with a dude trying to draw a pistol on you at arm’s length away aren’t happening in the real thing. 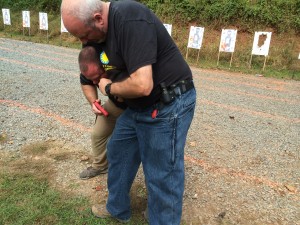 I was impressed by how much I took away from a single day of training, one of the most productive training days I’ve ever experienced. (Just like ECQC, the more you take into the class the more you’re likely to get out of it) You don’t have to be in incredible shape to learn something, nor do you run a significant risk of serious injury in the course. Everybody in the class I attended had a good attitude and even though some folks went at each other pretty hard everybody knew the limits and kept well within them. You don’t need to be worried about getting hurt or beat up in this class. In the initial introduction of the class Greg said “I try not to break students because I’ve found that injured students do not become repeat customers.”

If you’ve never had any training dealing with the 0-3 yard problem, Greg’s course is an excellent start. Even if you’ve done a class like ECQC before, as I have, Greg’s course is a great refresher on some of the basics and it will give you some new tips and tricks to boot. It’s a great course and a great value. If you find that Active Response Training is going to be in your neck of the woods definitely make plans to attend. You won’t be disappointed.