A while back we built an AR15 pistol up using an Aero Precision lower, DPMS complete upper from our friends at Brownells, and of course the Sig SB15 brace. Unfortunately, there were some feed issues with the gun, as demonstrated below:

After some testing, it was determined that the cause of the issue was likely the BCG. This was tested by putting the BCG in another gun and watching it double-feed like a champ all day long. So, the pistol has been upgraded. Here’s the new look, and new hotness. 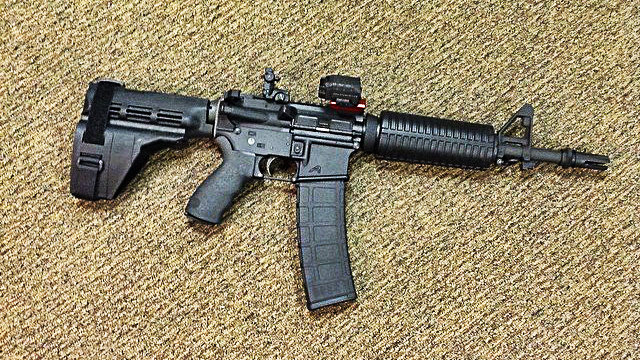 Still the same handguard and fixed front sight post, but the bolt carrier group has been upgraded to a Colt 6920 BCG that was sitting around the office. The charging handle was upgraded to a Rainier Arms Raptor because of reasons, and then I stuck a 40 round PMag in it because reloading is stupid. It’s going to the range tomorrow to see how it works. Sharp eyed readers will also notice the Crimson Trace Railmaster Light/Laser combo mounted on the side of the gun, and there’s a good reason for that. This gun is actually a really neat platform for an HD gun, but to really fill that role properly it needs sweet beams. So we put the best laser on the market on it, because anything less than the best is a felony.

Of course, what it really needs to be perfect for HD is a suppressor. Luckily it’s already wearing an AAC flash hider, so now I just need to come up with 1,000 bucks and wait 9 months for the paperwork to get approved. Oh, and make sure the gun actually works.