In Ferguson, a white cop shoots a black teenager that was in the process of assaulting said cop. Media outrage, riots ensue.

In New Jersey, a white prosecutor is throwing the book at a single black mother of two who committed a victimless crime. No media coverage whatsoever. Why isn’t the media covering Shaneen Allen’s case? Because she’s not exploitable, because she’s a gun owner. You haven’t heard of the Shaneen Allen case unless you’re involved in the fight to protect our right to keep and bear arms.

Shaneen Allen is a law abiding citizen; and like many citizens and an increasing number of women, she recently purchased a handgun for self-defense. As a single mother of two, she’s responsible for her own safety and the safety of her children. She followed the laws for the purchase, passed a NICS check, and acquired a PA concealed carry permit. Shaneen now faces up to ten years in prison. Her crime? Crossing a line on a map. 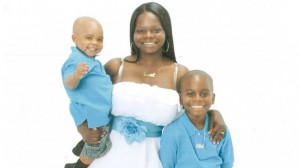 Shaneen was pulled over in New Jersey; and in ignorance of NJ’s draconian gun laws, informed the officer who pulled her over that she had a gun, and a permit to carry that gun. Because New Jersey doesn’t honor her PA LTC, she was arrested. Under NJ’s terrible gun laws, she could face up ten years in prison and a felony conviction…for trying to do the right thing. The prosecutor in Shaneen’s case could absolutely have exercised his discretion and not filed charges. Instead, he chose to throw the book at her, simply for the crime of being honest.

Think about that for a minute. The laws of New Jersey encourage you, if you’re accidentally in violation of them, to lie. To be dishonest. Imagine if you’re driving a car, and by crossing an invisible line on a map, you’re suddenly committing a felony that you’re not aware of. That’s what happened to Shaneen Allen, and now she’s fighting a terrible legal battle to remain free. But there’s no media outrage. No riots. Jesse Jackson isn’t there, Al Sharpton isn’t there. Shaneen doesn’t fit the media’s desired narrative.