Yesterday, we talked about the importance of lights and lasers on defensive firearms. I wasn’t particularly surprised when both here and on Facebook comments showed up saying that lasers were bad. These comments all followed the exact same pattern:

“Well actually I prefer to train to use the sights because I’ll get dependent on the laser which will fail and break when I need it, and besides I don’t need any of that tacticool gadgetry on my gun because I’m so awesome and I learned to shoot in the Army during Vietnam.” 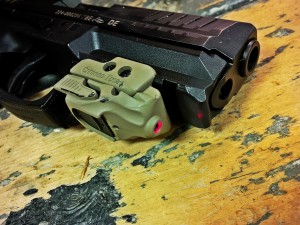 There are many problems with that line of reasoning, but at the core it’s simple. It is the argument of a lazy person. If you distill it to its essence, what they’re saying is “I’m so lazy that if I put a laser on my gun it would turn into a crutch, so no one should do it.” I have a solution, and a proptip: Don’t be lazy. Train to use the sights. Because the real secret of lasers is that they don’t magically make you into a super dooper ninja-shooter. If you’re a garbage shooter without a laser, putting a laser on will just make you a garbage shooter with a good sighting system. I’ve seen it in classes. I was taking a class once and the gentleman to the right of me on the line had some kind of Officer sized 1911 that was giving him all kinds of fits. I watched his laser bounce around the target, and every shot hit low and left. Of course he blamed the gun, until the instructor came over and center-punched the target repeatedly with the student’s gun.

A laser won’t magically make you better at shooting. But it won’t automatically become a crutch, either. Here’s the other big secret: if you train to use the sights and your laser fails, YOUR SIGHTS ARE STILL ON YOUR GUN. What a laser does is make it easier to get hits in low-light situations and retain a target focus. I have lasers on all my defensive guns, but I rarely have “laser-specific” training. I practice using my sights. All the time. Because I know that when I need the laser, it will be there, and if something goes TU and the laser goes down, well it’s not like my sights have disappeared from my gun.

The final thing I’d like to address is durability. I’m going to confine this discussion solely to the Crimson Trace line of products, because I have the most experience with those. I should note as an aside that I do have a Viridian unit on the way for T&E, and they seem to spoken pretty well of in my circles. Back to the durability point. Crimson Trace lasers have been around for decades now. I have a j-frame laser unit that’s been rained on, sweated on, dropped in the dirt, banged around a glove box, and it has never lost zero and still works. I’ve had dozens of different CTC products on guns over the years, and I’ve had problems with exactly 1 of them, and Crimson Trace fixed it. There is this idea that we’re still stuck with the lasers of the 1980s, which were delicate, fragile things. We’re not. Modern laser aiming devices from reputable companies are as durable and robust as a properly tough optic. They’re not going to just crap out for no reason…and if they do, you still have the sights on your gun.