Editor’s Note: Rumors of the M9’s demise appear to be untrue. This is my shocked face.

Accokeek, MD (July 28th, 2014) – Beretta Defense Technologies announced today the purchase by the U.S. Army of a quarter million dollars worth of additional M9 pistols from Beretta U.S.A. Corp. The Army acquired the additional pistols by issuing the 6th delivery order to date against a contract for up to 100,000 pistols awarded by the Army to Beretta U.S.A. Corp. in September 2012. 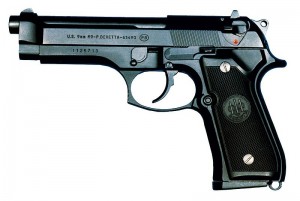 The Beretta M9 is a 9x19mm caliber pistol adopted by the United States Armed Forces in 1985. The M9, which has been in U.S. production since 1987, is manufactured at the Beretta U.S.A. facility located in Accokeek, Maryland. To date, Beretta has delivered over 600,000 M9 pistols, with 18,000 already scheduled for delivery under the new 5 year contract.

In addition to receiving the delivery order for additional M9 9mm pistols, Beretta U.S.A. has been fulfilling U.S. military orders for M9 parts during the past year. “Throughout 2014 Beretta U.S.A. has been performing First Article Testing on new M9 parts and has begun the delivery of thousands of these components to U.S. military depots,” commented Gabriele de Plano, Beretta U.S.A.’s Vice President of Military Marketing & Sales. “We are, as always, honored and pleased to be able to serve our U.S. Armed Forces by providing our service men and women with a reliable and accurate pistol that has been proven in combat time and time again.”