Mindset is important. Under stress the human body is capable of amazing things. But you can have all the mindset in the world and still have your body fail because it lacks the physical capacity to accomplish the task you’ve set out. I can have all the mindset in the world to run a marathon, but if I haven’t trained my body I’ll fail. I have the right mindset to dead lift 350 pounds, but if I try it tomorrow I’ll fail because I’m quite literally not strong enough. 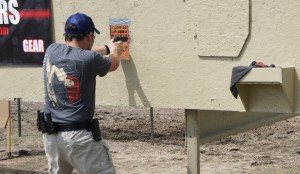 Mindset is hugely important. But the kind of people who say that mindset can overcome a lack of physical ability and training are the sort of people who’ve never spent any real time testing and improving their physical abilities. Bottom line: I can have the right mindset to shoot a 4.00 second El Pres but if I don’t put in the time and training to get there, “mindset” just becomes a code word for self-delusion.

There are two overarching types of mindset, positive and negative. The “I think I can” vs “I think I can’t” and for the purpose of this discussion we’ll eliminate the negative mindset entirely. It is an absolute truth that if you believe you can’t do something, you won’t. But because the negative mind is so powerful, people often assume that the inverse is true: if I believe I can do something, I will! This sort of Little Engine that Could philosophy is fine for 2nd graders, but it doesn’t have a place in performance training. What mindset should do, what the right mindset will do is allow you to unlock the limits of your trained physical capacity. Here are two examples pulled from running:

In both instances I had “good” mindset, but in the first I was just deluding myself because I had no idea what my actual performance capabilities were. The same applies to shooting, and I’ll use an actual real example of myself. In 2013, I shot Single Stack Nationals for the first time. I wanted to win B-class, and I believed that I had the necessary shooting skills to pull it off. I was wrong, and finished 6th in my class. I didn’t fail because of my mindset, I failed because I wasn’t good enough at shooting. I lacked the physical skills to accomplish my goal, in part because I didn’t understand the level I needed to be able to perform to in order to win.

“But Caleb”, you’re saying “What about those soldiers who overcome incredible odds in spite of serious injuries to prevail?” Oh, you mean those guys whose job and training revolves around being able to defeat a determined foe in the worst conditions? Yes, they had great mindset…because they understood what they were capable of under optimal circumstances and were able to adapt when the situation went pear shaped. That’s the key thing to remember about mindset: you can have all the positive mindset in the world, but unless you know what you’re capable of under optimal circumstances, having a good mindset won’t help you when you’re under stress.

Mindset allows you to access your maximum trained potential. If you don’t know how fast you can run a mile, all the mindset in the world won’t help you run a marathon. Mindset isn’t some magical thinking that turns average, doughy citizens into SheepDog Warrior Protectors. It’s a function of a disciplined mind and a solid training regimen.