I love the idea of pistol caliber carbines the same way I love the idea of the M1 carbine. A good PC should be lighter than an average AR (6 pounds or less), take common pistol magazines, and be accurate and reliable. What it does in this roll is give shooters the ability to extend their zone of domination or whatever silly tactical phrase you want to use out past the effective range of a pistol. Essentially, someone who can effectively fight within 10 yards with a pistol becomes capable out to 50 yards with a pistol carbine.

They’re also great range toys, especially in 9mm. What’s frustrating is when people try to make a PC into something it’s not, like a replacement for a proper rifle in a serious service caliber (.223 and up) or they derp it up like a range toy and tell you that it’s a serious gun. Remember, the goals of a good PC are to have a lightweight, fast handling, reliable gun. On that note however, there is basically no situation I can think of where I’d rather have a pistol caliber carbine than either a 12 gauge shotgun or a .223 caliber rifle, logistics being equal.

But, that’s not the point. What we do want to talk about today is selecting a pistol caliber carbine, and how to set it up smartly. To do that, let’s look at those criteria established above: weight, accuracy, reliability, and commonality of magazines. Interestingly, if I’d been writing this post 15 years ago, during the dark days of the Clinton AWB (yes holy s*** it was that long ago) we would have had a lot more choices for carbines. Today, because of the AR revolution, anything you can do with a PC you can do better with a 16 inch AR, or if you’re feeling froggy a pistol AR with an SB15 brace. So today, what are our mainstream choices for a pistol caliber carbine? 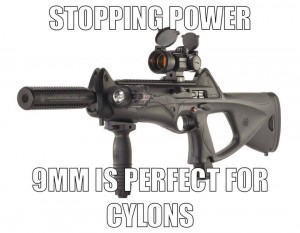 Running down that list, the first thing we can do is toss out the 9mm AR carbine. The platform has too many variables, and if you’re going to get an AR, just get an AR in .223 and do it right. So then to rank them in order of preference, the best bet is the Cx4 Storm, then the Hi-Point carbine, and finally the Kel-Tec. The Storm is the best bet because it’s made by a reputable company, weighs less than 6 pounds, and accepts common magazines, either Beretta 92 mags or Px4 Storm magazines. It’s also available in .45 ACP if that’s your cup of tea, and to be honest, I kind of dig it in .45. But 9mm is the smarter choice.

The Hi-Point is next because if you’re not going to buy from a quality manufacturer, you should spend as little money as possible. And frankly, the Hi-Point carbines are the only Hi-Points I actually like. They also tend to work pretty well, because they feed from a single stack 10 round magazine and use a bone simple gas blowback operating system. So yes, they’re cheap (although not as cheap as they used to be) generally reliable, and easy to shoot well. While the mags aren’t terrible standardized, they’re also cheap (15 bucks) so you can buy plenty.

The last choice one is the Kel-Tec Sub2000. What you get with the Sub2000 is 1/3 the quality of the Beretta for 2/3rds of the price, and that’s just a bad deal. I certainly wouldn’t bet my life on a gun that folds in half in front of the receiver. You’re better off buying the Hi-Point, because it will be half the price of the Kel-Tec, and will probably be more reliable. The only thing the Kel-Tec has going for it is that you can get one that takes Glock 17 magazines.

Now that you’ve picked your carbine, here’s how to set it up for victory. I don’t really believe that you need an optical sighting system on a pistol caliber carbine, but if you must get one than your best bet is to keep it small, and keep it light. Don’t get a cheap POS dot like a UTG red dot for $34.99 at your local Wal-Box. Get a decent quality dot. If you’re on a budget, get a Burris FastFire III. If you’re not on a budget get an RMR or an Aimpoint Micro. Remember, the goal is to NOT sacrifice the gun’s lightness. As far as lights go, just get a Crimson Trace RailMaster. They’re like $120, have 100 lumens, and are a good product made by a reputable company. You’re not fighting hadji in the mountains here, so you don’t really need a face-melting 600 lumen death ray. You need to be able to 1) see your target, and 2) hit your target. That’s it.

A sling would be good depending on the gun’s operational plan. If you have children and use a long gun for home defense, a sling is mandatory. If no kids, it’s optional.

A note on the accessories: if you go the Hi-Point route, don’t bother with an optic. Their rail system isn’t really stable enough for that, and you’ll find your zero constantly shifting. Just stick the light on there and call it good. The same goes with the Kel-Tec, because the rail system they make doesn’t really anchor very well, and your zero is going to jump around like crazy. Put a light on it, and stick with the iron sights.

That’s pretty much it. While I will still recommend a proper rifle or a shotgun over a pistol caliber carbine, if you keep your purpose clear, you can set one up pretty well for home defense. Light rifles are right rifles, so keep it clean, keep it light, and don’t ruin a lightweight, fast handling rifle by hanging a bunch of derpy parts on it.