I spent the last two weeks open carrying as part of my OC Experiment. I wanted to get a first hand feel for what OC was really all about, and why people would choose it as a primary method of carry. At the end, I was frustrated, not with OC or my interactions with the public, but with my interactions with hardcore OC advocates. You can read the final summary post here.

It wasn’t all a waste of time though, because I did learn a lot. Here are the five most important lessons I learned from the Open Carry experiment.

1. Most people won’t even notice your gun
As long as you’re not doing something retarded (like carrying a slung long gun across the front of your body) most people won’t even notice that you’re carrying. The simple fact: most people are so absorbed in their own heads that they won’t even notice YOU unless you’re specifically A) drawing attention to yourself or B) interacting with them in a retail/normal manner. The average dude walking around is probably so deep in his iDevice that he might trip over a parking meter. It is hard to empirically prove this of course, but the reason I’m comfortable making this statement is because of the point 2 below this.

2. The people who do notice have obvious reactions
I could easily tell when people noticed that I was open carrying. They’d look at me, look at my gun, back at me, and then would either continue to act normal, or would or would pretend to act normal with slightly wider eyes than before. It’s that second one, when people would pretend to be okay with it, but clearly uncomfortable that I found especially frustrating. There shouldn’t be anything weird about a dude carrying a gun, but there is (in some places). There was one time this was humorous – I was walking the dog, and a gentleman asked me if my dog was a drug dog. I realized that wearing a tucked in polo, khakis, aviators, and carrying a gun resulted in a very specific look. Whoops. 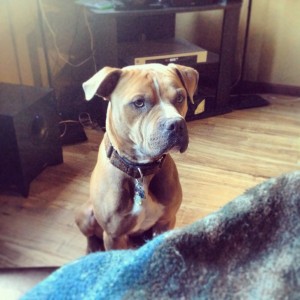 3. Most people who OC are cool bros (and ladybros).
It’s really true. The majority of people who open carry are just carrying their guns and going about their lives. Do they sometimes use shitty holsters with embarrassingly awful guns on terrible belts? Yes, but that doesn’t make them bad people. They’re just honest folk doing something perfectly legal. And that’s awesome. I would go so far as to say that 95% of people who OC on the reg are just fine folk.

4. The other five percent of OCers are wretched trolls.
I mentioned in the post the other day that what really frustrated me about my OC experience was being accused of being an anti-gun shill for Bloomberg by people who were ostensibly on the same side of the gun issue as me. That is annoying. I had some pretty choice words for those people, and I stand by them. The frustrating level of tone-deafness I encountered was shocking. Here’s the thing: we now have actual, documented incidents where OC has actively harmed the pro-gun movement. When private corporations says “hey, don’t bring your guns in here” that is a loss. It may not be a big one, but it’s still a loss. So when I hear OC advocates talking about “educating and desensitizing” I’ve realized that’s code for “carrying my gun and video taping the cops.” That doesn’t help. The 95% of OC dudes that are cool? They don’t do that. They just get up, carry their guns, and go about their business.

5. In the end, it doesn’t really matter how you carry, so long as you’re not a jerk.
I feel like that should be self-explanatory. Don’t be a jerk. Don’t be rude to people, don’t run your mouth, don’t scream at traffic. In the words of the poet William Smith to a space cockroach: “Don’t start none, won’t be none.”