A couple of weeks back Chris Fry of MDTS training sent me an email asking me to try out a little invention that I’d been hearing rumors about for quite some time. A device designed to make carrying self defense related tools in what is termed the “non-permissive environment” easier.

Before we can even begin talking about the product and my experience with it, it’s probably necessary to talk about the “non-permissive environment” or NPE. There are places in our country where you can legally carry a gun and, if you’re spotted carrying one, nobody will much care. There are other places where being caught carrying a weapon of any sort can lead to life-altering consequences. People often think of this in terms of criminal charges, but it goes far beyond that. Being fired because you were carrying an effective defensive tool, for example, would be a real bummer. Most workplaces frown on the idea of employees being armed while at work whether that’s with a firearm or an edged weapon of some sort. Items like OC spray or even some flashlights can also be prohibited in various circumstances.

Frequently these environments also have a dress code that isn’t favorable for concealment of defensive instruments. There are certainly some places where you could show up looking like a model from a 5.11 catalog and never get noticed, but in a number of workplaces you cannot get away with a prolifically pocketed vest (or “gun burkha”, as Tam might call it) sort of covering a utility belt loaded with goodies. Batman has a utility belt but Bruce Wayne can’t exactly show up to a charity fundraiser wearing it without drawing attention to things he’d rather keep hidden from public knowledge. A police officer on duty has to wear a Sam Browne when he’s in uniform to carry all the weapons and tools he needs to perform his duties, but while off-duty or on special assignment in plain clothes or a suit the officer is going to need to carry a smaller subset of gear without it being obvious.

Things like the pocket clips for knives or flashlights or the outline of a small handgun in the pocket are clues that somebody paying attention…or with whom you have to interact regularly…can pick up on to determine that you might have a weapon. If you’re an accountant, this can mean getting fired. If you’re working plainclothes security for an elected official, celebrity, or political dissident from another land under threat by an authoritarian regime, this can mean you get shot first. There are a lot of people on forums and youtube who have opinions on concealed carry, but in my experience few of them seem to have significant experience dealing with the restrictions and requirements of the NPE day in and day out. It’s one thing to not have total strangers who interact with you for brief periods of time occasionally notice that you’re carrying a weapon. It’s quite another to have people who know you pretty well and who are in close proximity to you for at least 40 hours per week not notice that you’re carrying a weapon.

That’s where the Moduloader Pocket Shield made by Raven Concealment Systems comes in. I discussed the philosophy behind the product with Chris to sort of wrap my head around what he was going for.

“The shield provided me the ability to carry a myriad of weapons, tools, items, whatever I chose to EDC that I did not want anyone to get visual on while still providing consistent orientation of the item in the pocket. This is the overreaching issue with any type of pocket carry system. Most, if not all, until the pocket shield, would move around during the day, change position, shift and you would lose orientation of the item you may have to rapidly access like a folder, small fixed blade, spare pistol magazine, pepper spray, flashlight, whatever. With the pocket shield, the items outline or profile is masked, it is moldable and contours to the end-users leg and pocket AND the item, when attached, will maintain consistent orientation allowing rapid access and draw-stroke. No ‘fishing’ in the pocket you dropped your folder into because you didn’t want anyone to see the clip and so on. The shield also allows the opportunity to mount a small frame pistol or small fixed blade, which is where it really shines.”

I’ve done pocket carry in everything from gym shorts to suit pants and I get where he’s coming from. If you carry regularly you generally rely pretty heavily on your pockets to keep stuff like a backup gun, a spare mag, or an edged weapon out of sight because you’re either not wearing a belt or have to have a tucked-in shirt…but that stuff gets shifted around so much it’s often difficult to access quickly. I’ve taken to carrying my Surefire E2E (with LED conversion head) in a rear back pocket simply because I was never able to draw the bloody thing in a hurry when it was in a front pocket. With the Shield I can guarantee that it stays in pretty much the same spot and orientation so I can get hold of it in a hurry. The clip on my E2E doesn’t work ideally with the Pocket Shield, so I’d advise a different light…but I’d wager most who would want to carry a flashlight in a front pocket are going to pick a different light anyway. 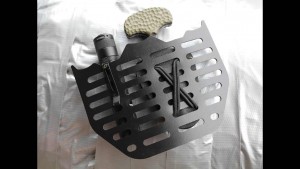 Chris told me up front that the Pocket Shield wasn’t intended to work in jeans, but I found that it fits into most of my jean pockets pretty well and does a good job of hiding the outline of whatever I have attached to it. So far I’ve attached my Clinch Pick, flashlight, and Leatherman Skele-tool to the Pocket Shield chassis and it’s hidden them all nicely in my pocket while allowing me to access them without too much fuss. I will say at least for the gear I’ve tried using so far, two items on the Pocket Shield seems to be the best way to go, as three gets a tad crowded and can impede the draw a bit. The PS comes with some mounting hardware that works well with riveted kydex knife sheaths, magazine pouches, tourniquet holders, and even small handgun holsters.

I’ve been playing with it for a couple of weeks and I’m thinking having one in each pocket just to serve as a pocket organizer that will hold stuff like my cell phone in a consistent orientation and location in the pocket would be useful in and of itself even if I never carried any sort of defensive implement with it. The PS keeps your pocket from collapsing when you sit, making access to pocketed items easier. 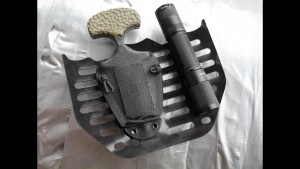 …and I don’t know about you, but I carry so much stuff around all the time that I’m forever giving myself a pat-down just to make sure I’m not leaving something important (like my cell phone) when I’m about to walk out. Having a PS for each front pocket that has the stuff I need mounted to it that I can just drop into each pocket has some appeal.

If you’re looking for something that will let you discretely carry defensive implements or even more mundane items in your pocket while making access easier, the RCS Moduloader Pocket Shield might be just the ticket.