You know what the most common argument I hear from pro Open Carry people? “We’re desensitize and educating the public!” Then last night, someone send this image to me in a tweet: 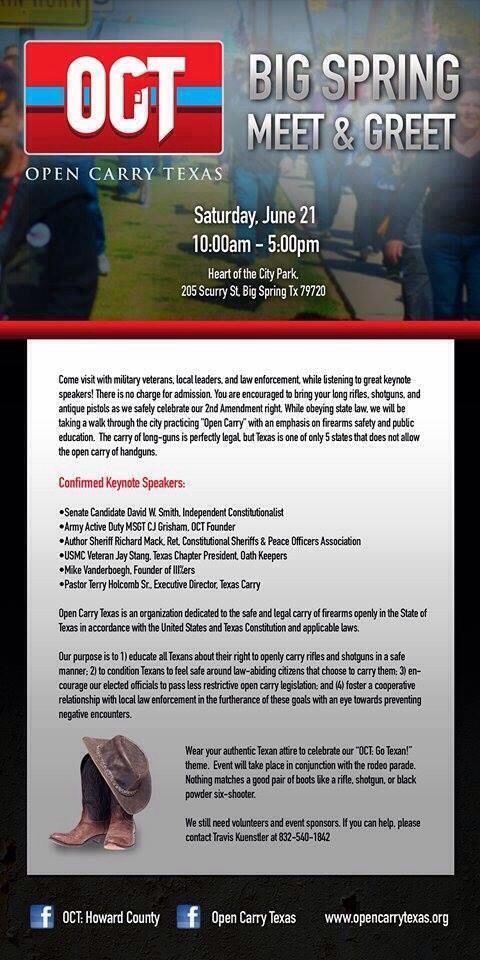 Desensitizing and educating the public? With Mike “Kill the ATF” Vanderboegh (or however the hell you spell it) there? Yeah sure, pull the other one pal, it’s got bells on it. You know what’s frustrating about all of this? There are GOOD examples of open carry out there. Look at Virginia, where they had a stupid law that prohibited CCW in restaurants. The VCDL went out, OC’d in restaurants, most importantly were not cocks about it, and got the law changed. That’s a win. Or look at Robb Allen and Florida Carry – their OC law is so screwed up that it’s only legal to OC while fishing or some nonsense like that. So what are they doing? Trying to get the law changed and not being dicks about it.

Then you have these guys in Open Carry Texas. It’s like no matter how many times they grab the live wire, they just keep going back to do it again. You want to prove that you’re not in this for the attention? Don’t hold big stupid rallies with no political point. Do something useful, like meet with your state representatives and ask them what kind of support they need from you to get open carry of handguns passed in Texas.

I would like to point out that is what they say their stated goal is: to get open carry of handguns legalized in Texas. It’s currently against the law, which likely comes as a shock to most people since they assume “Texas = Wild West and guns everywhere”, but the fact is that it’s illegal. So Open Carry ClownShow has decided the best route to legalization is to…carry rifles. How does that make any kind of sense?

Tell me exactly how getting a professional agitator and shit-talker like Mike V is going to help your cause? If you’re really interested in “education” why not do some PSAs on local cable? Or put up a booth at the local fair or something?

I still don’t like OC as a primary carry method. But if you are going to OC, just carry your gun. Don’t make your day revolve around the act of OC, and don’t define your political identity in terms of obeying the law in an annoying fashion. If Open Carry Texas was really serious about affecting political change, they’d knock off all this attention whoring BS and go sit down with their legislators.