Hit the range yesterday for my first post-Bianchi Cup training session. I wanted to get into some of the issues I had at the cup with long range pistol accuracy and see if I could diagnose what caused me to drop such a large number of points on the Practical at this year’s match. To do this, I shot the entire COF twice, but removed the par times allowing for maximum accuracy. By removing the par, I can take all the time I need and focus on getting good clean hits on target. 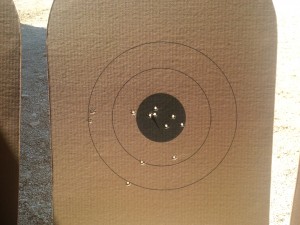 To set this drill up, you’ll need a range that goes back at least 50 yards. Your strings of fire happen at 10, 15, 25, and 50. At each yard line, you’ll have three strings that repeat: 1 on each target (2 shots), 2 on each target (4 shots), and 3 on each target (6 shots). The total is 48 rounds. At the 10 yard line, the 3 per target string is shot weak hand only by drawing the gun and switching it to your weak hand. 10 and 15 yards are relatively easy in the untimed version of the drill, although it’s easy to get tempted to rush your sight picture and go too fast. Remember, the goal is maximum accuracy, which means you want to shoot as many 10X as possible.

The 50 yard part is the hardest part, for a lot of reasons. Small shifts that would be the difference between just a 10 or an X at 15 yards become the difference between a 10 and a 5; you need to do everything right to get a good hit. At 50, I was very happy with my sight picture and trigger pull, and in fact I didn’t pull or yank any shots. However, out of 12 rounds I shot six 5s and one additional 8. That gave me a total score of 446, which is in the ballpark for how I shoot this during practice on the clock.

Because I’d shot so well through 25 yards, I needed to figure out what I’m doing wrong at 50. I don’t go prone at 50, which is a bit of a disadvantage because the gun isn’t as stable, but with the par times the match gives (7, 10, and 15 seconds) I have all the time in the world to make a clean shot at that range. What I noticed on the range yesterday was that my sight picture at 50 is harder to verify than at 25. I have my guns set up for a six o’clock hold on the x-ring, so the top of the front post should be directly under the X. At 25, even with a hard front sight focus, it’s easy to align the top of the post with the blurry x-ring. At 50, the X-ring is halved in visual size, and with a hard front sight focus becomes little more than a fuzzy dot. My operating theory is that because of that, I was letting the gun wander a little higher than my hold should have been.

The groups on target and match results back this up – all of the 5s I shot in practice yesterday were high, and most of the ones I shot at the matches were high as well. Now that I think I’ve diagnosed the problem, the only way I really know how to fix it is to spend a lot of time shooting at 50 yards and refining my sight picture until it’s perfect. Hooray for doing things are difficult.