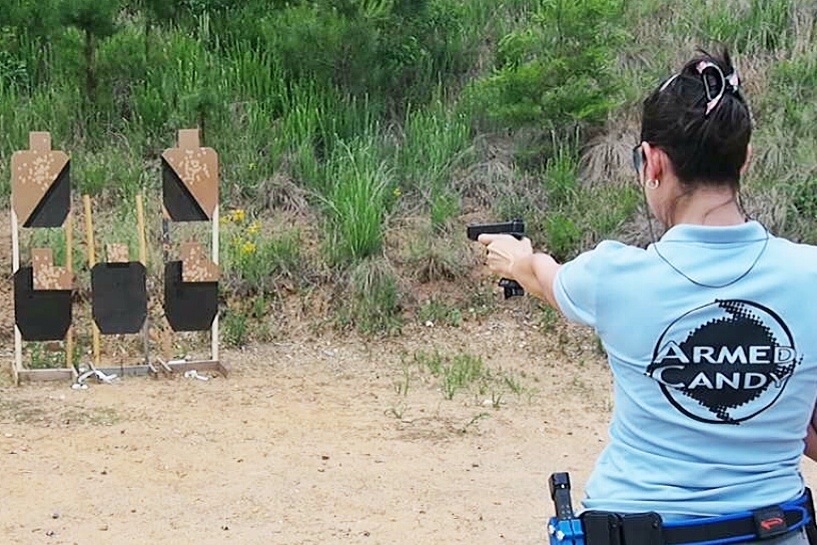 This past weekend I shot in my first pistol match. It was a no-frills USPSA club match in north Georgia. It was a last minute decision to accompany my friend, Janna Reeves at this match, when she promised me it would be a “no-pressure” environment. I signed up on Friday night and early Saturday morning I was rushing to the Riverbend Gun Club. As I left my house and got in the car, I was running behind, but even in my haste I grabbed the Zev Technologies Glock 34 that Janna loaned me. I was surprised, during the almost two hour long drive to the range, at my lack of nervousness. It could have been that I did not have enough time to develop butterflies, but I’m sure it wasn’t a feeling of being completely prepared, because I was acutely aware of how little I knew about USPSA matches. I parked my car, just as Janna pulled into the range’s parking lot, and that’s when it hit me; I had brought absolutely ZERO ammunition.

I planned to focus on not breaking the 180 rule, not starting before the buzzer, only shooting from inside the shooting box, basically, not doing anything that might get me disqualified. I had been briefed on the typical rookie mistakes and knew there was a good chance I would make one of them. However, I think, “don’t forget ammo” may be too basic a rule for even a shooting noob. Fortunately I was saved by my squad.

My last minute sign up allowed me to squad with Janna, which in turn had me shooting with members of the Noveske Shooting Team and Team Glock. If anything should have made me nervous, this should have been it. Instead, I was treated to top notch coaches for the day! Watching KC Eusebio, helped me understand exactly how a Grand Master would handle the stage. At the same time, Jansen Jones and Rob Romero helped me understand the differences between USPSA and 3gun while coaching me and Janna through walk-throughs. (It was Janna’s fourth pistol match, so she considers herself a noobie as well.)

The stages ran the gamut from lots of movement, to standing in one spot and from lots of steel targets, to all paper. Our squad started at an all steel stage. It required one sprint to a second shooting box with a magazine change. It was a great place for me to begin since I LOVE steel. I’m addicted to the ping! I have also just begun practicing magazine changes in training, so this felt like a great stage on which to warm up.

The buzzer sound didn’t stress me out, though I’ve previously worried that it might. I credit this to the use of the buzzer in training. I did find that the buzzer had the distinct ability to wipe my mind of any plans I had on how I intended to shoot a stage. However, I always kept my muzzle pointed down range (even when running in the opposite direction), and that was where planning and walk-throughs helped a great deal. Even when brass went down my shirt as I was shooting the very first stage, I managed to let it drop out, while maintains my sight picture and grip with my right hand.

As we walked the stages prior to shooting them, I learned that my knowledge of 3 gun scoring could affect my results negatively at a USPSA match. While 3gun likes two hits anywhere on a paper target, shooters are penalized for hits outside the Alpha target areas in USPSA. I also learned the trick to a spinning steel star target and was excited when I handled it with only one miss on my first try. I even kept my cool, when I turned the corner on a stage and realized that one of the holes in a target from a previous shooter had not been covered in pasters.

My favorite discovery at my first match, was the supportive nature of the pros with whom I was shooting. Coaching and tips started flowing as we loading magazines and only paused when the buzzer sounded for me. I prefer to open style of 3gun, which allows a shooter more freedom of decision making as they move through a stage. Though I’m very glad I am focusing on 3gun and not pistol-only competitions, I found this match to be great practice and lots of fun.

Check out this video of one of the stages from my first match. It required us to shoot one handed, both strong side and weak side. I had NEVER shot with only my left hand before.