By now everyone has heard of former Mayor Bloomberg’s latest project “Everytown for Gun Safety”. It’s no surprise that Everytown’s launch occurred on the same day as the opening of the 2014 NRA Annual Meetings, if for no other reason than it gave Everytowners a single location and group of people to focus their opening move. It was especially necessary to have something like NRAAM for Everytowners to attack since, from my research, they have very little legitimate arguments to unite them. I was willing to give this new group the benefit of the doubt. I could have overlooked the Bloomberg backing if the group actually did what they said and spread the word about “gun safety”. However, the website behind the name lived up to none of it’s promises. In fact, I found that the website of “Everytown for Gun Safety” offers nothing but scare tactics and empty statements.

I’ve decided to compare the section of the Everytown website that claims to offer gun safety tips for parents to the NSSF’s “Project Child Safe” program. The two entities claim to make a goal of the safety of children in homes where guns are present, so I figured both would offer similar advice to parents. (Ok, I didn’t really expect that, but I was trying to think positively.)

Everytown.org’s link reads “We can save lives by educating parents about safe gun storage and responsible gun ownership.” The NSSF launches immediately into what their project actually does, to make homes with guns safer for children. In Everytown’s child safety section, we first find a single infographic. It states, “2 million American kids live in homes with unsecured guns,” and allows me to share this graphic. My initial reaction is, wow, that’s a big scary number, but them I think, how on earth could they have that number???. In order to find such a statistic, Bloomberg would have had to poll gun owners who have kids but do not own safes or locks. Where would he find such a list? Legally, one should not exist…and I highly doubt his people were standing outside of gun stores asking folks to fill out surveys.

As I went further into Everytown’s educational offerings for parents, I found a disturbing video of two kids playing hide-and-go-seek. Inevitably the little girl finds a gun in her parents closet and decides that it is a toy. (Spoiler Alert) Her brother eventually finds her in the closet, and the screen goes black as a shot is heard. The video then offers an “Act Now” button, but as of Saturday (4/26/14) this was not an active link. Well, s**t! I’m ready to act now! I don’t want kids shooting eachother, by accident or otherwise! How do I stop it Mr. Bloomberg? HOW??? Unfortunately the Everytown site offers no help. If I click on “Act” in other site locations, I get to pledge my allegiance to “Gunsense”, but since I have no idea what that is, I’ll pass. ( I should also point out, that while this video is moving, it is not a depiction of Bloomberg’s sworn enemy “gun violence” at all.) 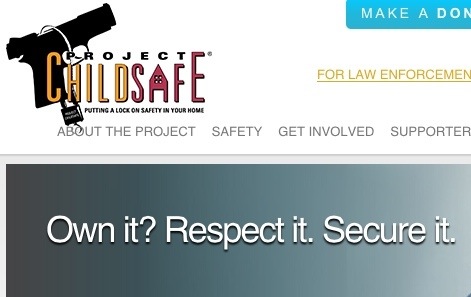 Meanwhile the Project Child Safe site offers a quiz of my gun safety knowledge. They have a promenant infographic of the “safe storage” options available. They have guidelines on how to talk to children about gun safety as well as how to keep children from finding parents’ guns. Project Child Safe works with local law enforcement agencies around the country to distribute packets of safe gun storage information, as well as an actual lock. On their website, I can find out where this is happening near me. I can take a pledge to “Own it? Respect it. Secure it.” And I can find out who in the legislature I can contact to request that federal funding go toward this endeavor. Maybe if even a little of Bloomberg’s $50 million was sent to Project Child Safe, he might actually be helping to prevent “gun violence.” From everything I saw on the Everytown website, at this point, he’s doing a whole lot of nothing.