NRA Annual Meetings are just around the corner! It’s one of the best events of the year, and because it’s open to the general public it always attracts huge crowds. There are also loads of media at the NRA show, from the New York Times all the way down to peasant bloggers. It makes the press room at NRA one of the most amusing places I get to go every year, because you can have writers from Forbes sitting right next to some guy in a Jayne Cobb hat. It’s awesome. Here’s a humorous look at five of the most prominent media types you’ll see.

1. The Mainstream Media
I’m always amazed at these guys when they show up. It’s usually because they’re there to cover the 100 protesters outside the Annual Meetings while basically ignoring the 75,000 people inside the actual meeting. Which is fine, it’s just weird. Usually their stories come out as “ha-ha, look at these dumb cousin humping rednecks who love guns, and these few brave souls standing against the tide of evil that is the NRA.” I’d say they’re worthless, but they do make me laugh, and there is value in laughter.

2. The Local Media
These guys are my favorites. Their coverage is usually a combination of “wow, look at all the money these people are spending, this is great for the local community, but man guns are sure are icky and gross.” Usually a few months before the show there will be some useless hit pieces trying to link the NRA to local gun violence or some nonsense, and at the actual meeting they’ll usually cover the protesters as well. To their credit, they’ll try and actually talk to some NRA members in the actual meetings as well. Unfortunately, that’s usually because they’re auditioning for a cable news network job, so they ask dumbass questions like “how do you feel about the scourge of gun violence” to some dude who just wants to look at the cool new .339 Elephant Thumper rifle from Safari Guns, Intl.

3. Buzzfeed
No, seriously buzzfeed was there last year. I couldn’t help but think of the line from Archer: “Lana, look! He thinks he’s people!” Buzzfeed is terrible.

And now we switch gears to the pro-gun media!

4. The Old Media
Easily spotted in their realtree camo jackets and jeans, the Old Media can be overheard in the press-room discussing what a Faceblog is, and how to make it stop. If you want to see the finest coverage of duck decoys and shotguns you can’t afford, these are definitely the guys to check out. Insert joke about sad devotion to ancient religions.

5. The new media guys
Of course, if there’s one thing worse than the old media, it’s the new media. There’s nothing worse than a blogger who think that just because they’re smart enough to set up a wordpress page and pound out some mediocre content every now and then that their opinion is actually worth more than a fart in the wind. Seriously, bloggers are just the worst people ever. Can you imagine the massive ego it must take to think that your opinion is SO IMPORTANT that the whole internet should read it? Ugh. 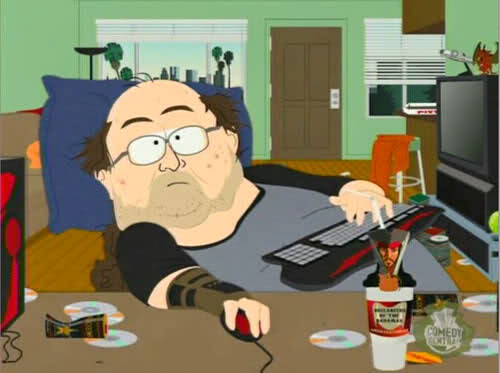 Bonus: Shooting USA
Jim, John, and Mike from Shooting USA are awesome, and it’s always a pleasure to see them at shows. Some of the nicest guys in the industry.

Hope you’ve enjoyed this humorous look at some of the media types you’ll see at NRA Annual Meetings! Both Shelley Rae and I will be in attendance this year, so if you see a hyperactive midget walking around with a ginger that’s out of his league, make sure to say hello!