On Tuesday, I took the modified Px4 Storm to the range to test the reliability. You’ve seen the results of the accuracy testing, so now let’s talk reliability. I was concerned that putting the D-spring from a Cougar might compromise ignition reliability with hard primers. As it turns out, my fears were completely unfounded. 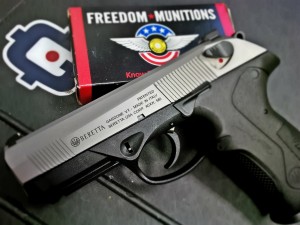 Here’s the full report of how the gun functioned:

*The 147 grain FMJ from Freedom Munitions had a badly underloaded round in the box. During a string of fire, the report was noticeably quieter and the gun failed to complete its cycle of operation. The report was so quiet that I initially assumed I had a squib, and checked the bore for obstruction before continuing. Because this was clearly an ammo issue, I won’t count it against the gun.

The total round count for the testing session was 239 rounds, all of which went off when the firing pin hit the primer. The concern about reliable ignition was fairly conclusively settled. I do wish I’d had some really hard primered stuff like S&B or Armscor, but at the same time knowing that it will crack the hard NATO primers in the Winchester loads puts me at ease. The light loaded FM round was a small concern, but not something I’m going to worry too much about. Their ammo has been very reliable in the past, and this is the first real issue I’ve encountered with despite shooting it frequently. I figure one round out of 10,000 or so is worth a mulligan.

Right now, I’m still carrying the Lionheart LH9 as my primary gun. It holds two less rounds than the Storm, but it’s smaller and easier to conceal. The enormous butt of the Px4 makes concealment under anything other than a sweatshirt somewhat problematic, unless I decide to switch back to strong side IWB carry away from appendix. Still, the Px4 is growing on me the more I run it.