I have a Px4 Storm. It is a very nice gun, chambered in 9mm, and I think it just looks great. It’s also a very easy gun to shoot, with a pleasant recoil impulse and an excellent DA/SA trigger right out of the box. However, what if it was possible to make the Storm’s trigger even better? 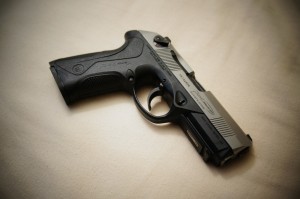 Beretta afficionados have long known that the quickest way to improve the trigger pull on a Beretta 92/M9 series gun is to pull the factory mainspring and replacing it with one of the springs from the DAO Beretta 92, referred to as “the D spring.” That plan doesn’t work on a Px4 Storm, because all of the models share the same mainspring. It doesn’t matter if you get a G, F, D, or C model – same mainspring in a Storm. However, there’s a possible solution, and that lies in the spiritual predecessor to the Storm: the Beretta 8000 series. The Cougar guns never really caught on, but importantly for our purposes, they did make a 8000 D series. After reading reports of other shooters swapping the D springs from Cougars into their Px4 Storms, I decided to give it a try.

Part 1: the spring change
After discovering that Brownells stocks D springs for Beretta Cougars, I ordered…several. Whenever attempting a new procedure on a firearm, I’ve found it’s best to order a few redundant parts just in case I decide to send one flying across the room. I once shot a guide rod out of a 92FS hard enough to break a plate, and if you’ve seen my Ruger GP100 Trigger Job video you know that I don’t always get along well with springs.

Actually changing the spring on the Storm is fairly easy.

A note on step 5. I’m not kidding when I say “considerable” amount of force. I was pulling on the spring at the point where internal force-meter was screaming “it’s going to break or something” but I just kept yanking and it came out. So, yeah that’s a fun a experience.

Part 2. Dry fire a bunch
After the spring change, it’s time for a bunch of dry fire to make sure everything’s all settled in correctly. After changing the spring to the Cougar D spring, I noticed an immediate reduction in trigger pull weight. The weight of the DA stroke fell to somewhere between 8 and 9 pounds, and the SA is now under 4 pounds. The trigger feels really great in dry fire.

The danger of swapping a spring like this is that it may not crack primers, and because it’s not a part that is spec’d for the Storm, the wear cycle might be different than what I’d like to see with a factory part. This afternoon I’ll be heading to the gun range to actually test the Storm and see if it can light off the primers on various types of ammo. Come back tomorrow for the range report!