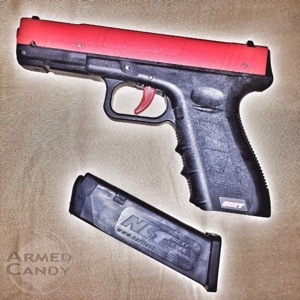 After reviewing a number of laser training systems, I now have the pleasure of testing Next Level Training’s SIRT Pro Training Pistol. I got a few minutes with this tool at SHOTShow 2014, and was very impressed with the realism of the product. The SIRT Pro is shaped just like a Glock 17. The slide is metal and the frame plastic, just like the real thing. Even the weight is similar and it has a detachable weighted magazine. The SIRT has two built-in lasers. The laser that comes from within the muzzel is green and appears when the trigger is fully depressed. A red laser appears from just below the muzzel and is activated anytime the trigger is touched. It is called the “trigger prep laser”. A small switch on the top of the slide allows the user to turn the trigger prep laser on or off. These are the only function options the SIRT offers. Why would you want the trigger prep laser on or off? Well, if you want to see the difference in the movement of the gun from the beginning to end of your trigger press, the first light can be helpful. It can also be useful to an instructor who is watching over your shoulder.

I am planning to compare the SIRT to some of the other laser training systems that I have previously reviewed, and even how they can be combined for more training options, but we will save that for another post. For now we will take a first look at the SIRT Pistol as well as discuss the future, as Next Level Training sees it.

When I opened the box containing the SIRT, the first thing I noticed was that it doesn’t have an on/off switch, no batteries to install and very few instructions in the box. I just picked it up and began using it. And this is exactly as the manufacturer intends. They prefer this simplicity. There are no trargets to set up, no slide to rack, just a “dot to lock down”. You can pick it up for a minute long session; Take a few precise trigger pulls, then go back to your day. Next Level Training hopes that because it’s so simple, you’ll use it, and use it often. The goal is to keep the green laser dot as a dot and not let it turn into a “dash” as the trigger is pressed. This is not the easiest thing to do. The trigger on the SIRT makes the task especially tough. It feels pretty similar to a Glock 17 trigger (though a lot more springy) and weighs an average of 9lbs 7oz. (Trigger weight measurement sponsored by Brownells) If you are not a Glock person, an M&P SIRT should be available later this month.

As I began to work with the SIRT, I quickly noticed how I couldn’t see the lasers. I assumed that this was intentional and that the manufacturer meant for the the product to be used within a classroom setting with an instructor looking on. Not exactly. I was informed that this wasn’t really the idea. Tools are included to adjust the lasers, but NLT said, that the laser strikes are easier to see when the shooter has both eyes open. What a neat trick! However, The idea is not that the lasers be used as a sighting-in tool, NLT explained to me. The lasers should not align with the top of the front sight, but where a shot would actually land. They would like to impress upon users “target focused shooting”. 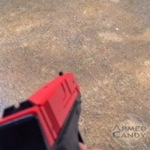 I appreciate what the SIRT is meant to do, but for the price, $439 on Next Level Training’s website, it’s very pricey for a product that only addresses one aspect of training. True, it will save you a great deal on ammo, but so will the balancing the penny on the front sight trick. Then again, the SIRT pistol does not require further purcheses. The battery should last for years, over hundreds of thousands of trigger pulls. It even works outside! The green laser is highly visible at 15 yards on a plane paper target, even in full sun. (In the photo to the left, both lasers are visible; They aren’t easy to see, but they’re there.)

However, if you don’t think you will use the SIRT at home enough to shell out that much cash, NLT has plans for you. The company has been talking to a number of organizations about creating classes around the SIRT pistol. The NRA, USCCA, A Girl and A Gun Women’s Shooting League and others, are already working with NLT.>