I am frequently skeptical of force on force training as a way to pressure test self-defense skills. Because most Force on Force (FoF) is scenario based, it’s very easy to construct contrived “gotcha” scenarios that leave the student without a better understanding of their own skills, or the application of deadly force. This post was spurred by a thread on Pistol-Forum, an AAR about a FoF class. Here’s the relevant scenario:

Scenario is, you’re going to pick up your teenage child from the mall. As you’re approaching the entrance, several distraught individuals pour out of the doors, panicked, screaming that some guys are fighting, one of them has a knife. You go inside and find that it’s your kid that’s got the knife, and is stabbing someone on the ground. As I was yelling at “my son” to stop, another person with a gun steps out from behind a corner, also screaming for him to drop the knife. Kid doesn’t drop the knife,I yell at the other guy to drop his gun, other guy shoots “my son” and I, of course, light him up. This one actually turned into a running (waddling in my case) gun fight. I got hit once in the left shin, but put most of two magazines (loaded with 5 rounds each) into the other shooter. Once again, even while trying not to get shot, I didn’t fumble my reload, I was VERY proud of myself on that one.
Story on this one was, “my son” got jumped by a group of guys that he’d been having problems with at school. He was defending himself. The other guy was a CCW holder that came onto the scene after the main group of BGs had run off, saw one guy stab another guy, told him to drop the knife and the guy didn’t, his shot was justified. I just saw some guy shoot “my son”, I was completely justified in dropping him. This scenario was designed so that it wasn’t really possible to have a happy ending, but rather, it made you think about EVERY single detail in the discussion afterwards. 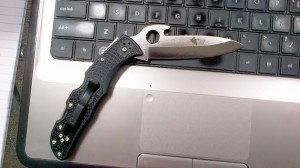 This is not a knock on the class, the student, or the instructors; from reading the AAR the other two scenarios were pretty reasonably constructed to simulate real life situations. But that third scenario really is a perfect example of the Kobayashi Maru scenario, because there’s no way to win. There was a video that went around a while back of a FoF event where the instructor, playing the badguy climbed up over the doorframe of the classroom to shoot the assaulters when they entered, because they hadn’t thought to scan directly above the doorway.

The point isn’t to knock FoF training. There are plenty of good FoF classes and events out there; our own Tim has attended Southnarc’s excellent EQCC class, and the same Southnarc also teaches the highly recommended Armed Movement in Structures (AMIS) class. Force on Force training can be extremely valuable for people interested in self-defense, so long as it’s conducted intelligently. That’s the most important part. It’s very easy for instructors to construct scenarios where the student can’t win, which doesn’t really accomplish anything. To return to the scenario written out; let’s just briefly examine that. What do you think the odds are of one of your kids getting involved in a knife fight at the mall, and you encountering another CCW holder who shoots your son. It’s so far outside the realm of what you’re likely to encounter that it’s damn near ludicrous.

Get training! If you’re serious about improvement as a shooter or self-defense, training is essential. But it’s important to be able to sort out good scenarios from fantasy-land. Some FoF scenarios are realistic and worthwhile. Others are just IDPA stages with simmunitions. And if you’re going to shoot an IDPA stage, it’s a lot more fun with a real gun.