The alternate title to this post could be “don’t carry generic JHP ammo” – a perfect example are the JHP rounds from American Eagle or WWB that you can get from Walmart. Lots of people will buy these things thinking that “a hollowpoint is a hollowpoint” and load them up and think they’re good to go. The truth is far from that, because not all JHP ammo is created equal. 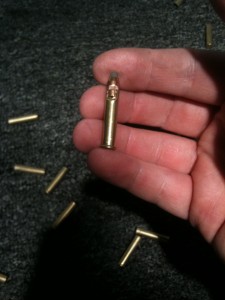 The biggest reason to not buy the generic JHP ammo is simple: quality control. Actual ammo that’s manufactured explicitly for self-defense use such as the excellent Winchester PDX or Federal HST is generally subjected to tighter quality control than ammo that’s sold under the more generic branding. Part of the reason you pay for more defensive ammo is that it’s more time consuming to produce.

The second reason is terminal performance. The JHP bullets loaded into those bulkpack boxes are not the latest bullet technology, which means they won’t perform as well as modern bullet designs such as PDX or HST. Again, LE agencies carry the rounds that they carry for a reason, and you’d be hard pressed to find an agency in the country that wasn’t carrying either Gold Dots, Ranger/PDX or HST. In fact, the performance of the bulkpack JHP is so inferior when compared to the “good stuff” that you might as well save yourself a couple of bucks and just carry FMJ instead.

If you’re savvy, you can even save yourself a few bucks on the good stuff. When big companies package their good bullets for the consumer market, they’ll usually put them in flashier boxes that hold 20 or 25 rounds. But when they sell those same rounds to agencies, they’re in simple cardboard boxes of 50. This is where gunbroker actually comes in handy, because you can get overruns of ammo that was produced for LE agencies at a price savings if you shop smart (shop s-mart). Yes, on gunbroker you have to watch out for people overcharging, but at the same time there are some pretty good deals. Just this morning I found a box of Ranger T-Series 9mm in 147 grain for just $299 for a half-case (500 rounds) which means your per round cost is under $0.60. Not bad for defensive ammo.

Don’t bet your life on bargain hollowpoints. If they’re “all you can afford” than just buy some FMJ ammo anyway and get more practice in. Save up a couple of bucks and get the good stuff, and be cagey about how you shop for it to find deals.