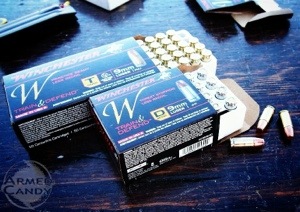 This year at SHOTShow, some manufacturers were still questioning how to appeal to the “new shooter” (aka not-yet-a-gun-geek) while others were already hitting it out of the park. Enter, W by Winchester Amunition. They cought my attention at Media Day at he Range, where Rob Pincus was offering something of a Pepsi Challenge. This was a brilliant way of presenting a product that might otherwise blend into the background.

Many shooters go to the range and shoot whatever “range” ammo they have there. This is unfortunate because there are so many differences between that stuff and they self defense rounds they load into their gun as they leave the range. Nervous beginners often ask how different the experience will be if they have to pull the trigger with the good stuff. Winchester obviously heard this concern and did something about it.

“W” is a line of traing and defense ammo that has been engineered to feel exactly the same. This allows the new shooter to have one less worry on their minds. The boxes are marked with a “T” or a “D” so they don’t have fumble with confusing stats that can be overwhelming. This concept will likely appeal to beginners because they will be able to feel a little less beginner-ee, if only for moment.

This is a huge step toward marketing to the newbies and welcoming them into the world of guns; A world that can sometimes be confusing, scary and uninviting. I commend Winchester for leading the way!