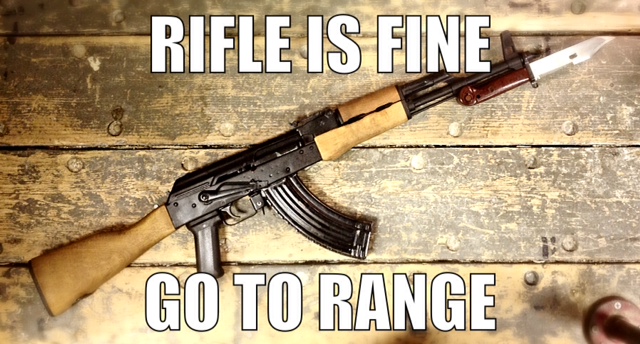 Pulled a brand new WASR-10 out of the box today. AK prices have finally started to fall back to the pre-panic point, as this gun is streeting for around $500. That’s actually a good deal, and puts the AK back in the “sensible purchase” category. When a new WASR was going for the same price as a decent AR15, it didn’t make any kind of sense to buy an AK, unless you just wanted to be different.

At $500, the WASR has a decent feature set. This gun has unusually nice furniture for a WASR, comes with the side-rail scope mount (that I won’t use), a slant-brake, hard-chrome lined barrel, and for giggles…a bayonet. For five hundred bucks, that’s a lot of Rifle for Glorious People’s Revolution. For 922(r) nonsense, the WASR also has a Tapco trigger and pistol grip, as well as some other parts that are installed because Rules.

The real question is “what to do with this AK?” Well, I could go one of two routes. It’s sufficiently different from the AR15 that I could just shoot the wheels off it and do all my tactical carbine training with an AK just to be different. Alternatively, I could build it into a sweet modern AK. I have a Midwest Industries rail system, a MOE stock conversion kit, and an RMR I could stick on it. That would be pretty cool as well to have a sweet modern AK.

What do you think, Gun Nuts? Is Rifle Fine, or should I make it more awesome and modern? Lights, lasers, and better stocks?