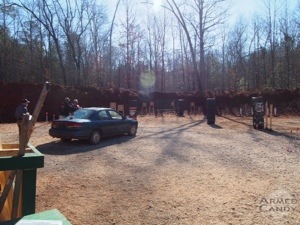 I have now signed up to shoot the Brownell’s Lady 3 Gun match, where I will be sponsored by GunUp Publishing, but up until last week I had never seen a 3 Gun match in action. I decided to head an hour south and east of Atlanta to South River Gun Club, the location of Atlanta 3 Gun’s monthly club match, to remedy this. It was also my first chance to see the location where the ladies-only major match will be held this coming October.

South River Gun Club is a maze of bays and berms. I was surprised to see shooting occurring in so many directions. While shooters are always aiming at sturdy berms, there were times when I found myself walking behind a pile of dirt, knowing that a gun was pointed at me on the other side. That being said, there is a lot of walking between stages. It seemed to be more walking than some other matches and clubs I’ve attended.

I found the shooting boxes very intriguing as I watched shooters attack each stage. While only one set up had competitors literally running between bays (though they were not carrying or wearing any gun at the time) the movement of shooters was different than I had expected. In that I mean, there was so little of it. One stage did have a car as a barricade that required a shooter to move around it, but I was expecting even more activity.

Now that I have seen how Atlanta 3 Gun sets up their stages, I have a little better understanding of how to prepare for the match. I will end up shooting a club match (or a few) prior to October, and I have begun practicing with dummy rounds, but what else would you recommend I do to prepare?