One of my goals for 2014 is to get more involved in hunting. I went on my first pheasant hunt last year and had a properly awesome time. I realized that there are lot of cross-training opportunities in tactical shooting and hunting; and I started talking to Jordan from Run 2 Gun about the fitness opportunities in hunting as well. That’s when I realized that hunting really is the original extreme sport. While we’ve mitigated some of the danger that hunting used to involve, it’s the only sport that you can legally participate in that allows you to test your marksmanship skills with blood on the line. 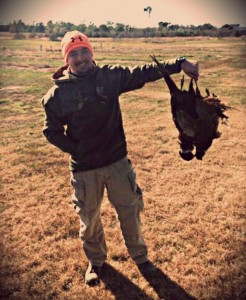 That’s why one of the big goals I have for 2014 is to expand the blog’s coverage of hunting – but not “sit in a tree stand and whisper” hunting but more of the aforementioned Run2Gun “let’s get after it” hunting. While Shelley will be covering 3-Gun, I’ll be doing a lot more hunting coverage. In fact, I have my first hunt of 2014 already scheduled, I’ll be traveling to Nevada with Crimson Trace to do a coyote hunt, which should be a lot of fun. That will also give me a chance to test out the new Danner boots I got the other day, the High Ground RealTree Xtra GTX 1000G.

Back to the original topic of hunting as the original extreme sport, one of the biggest proponents of hunting as a valuable tool for defensive learning was Jeff Cooper himself. He believed, and rightly so, that the average CCW holder/armed citizen should avail themselves of every possible opportunity to shoot for blood. I agree that someone who can successfully kill an animal has at least a small mindset advantage over the average private citizen who hasn’t.

If you take people whose jobs entail shooting badguys (soldiers and LEOs) out of the equation, we believe that the best way an armed citizen can prepare for a defensive encounter is a balance of defensive firearms training, competition shooting, and hunting. Training to learn, competition to test skills, and hunting to learn mindset. I’ll be exploring that more this year, and I’m looking forward to sharing those experiences with you.